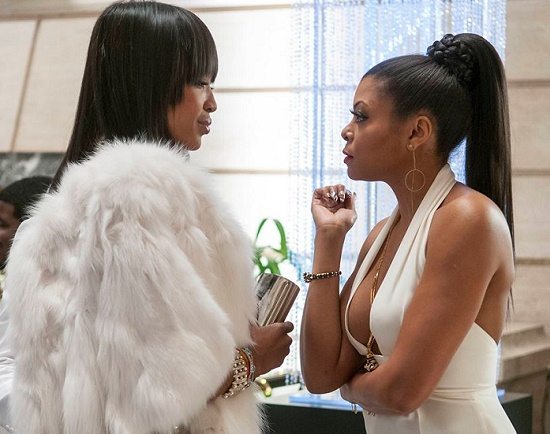 And we're back with another Empire Watch. When we left off last week, Lucious had helped himself to some of Cookie's...well...cookies after revealing to the family that he had a fatal case of ALS. And, because this is a nighttime soap, Lucious' fiancée got home from Chicago just in time to see them doing the do. And while that was an explosive moment, it didn't have nothin' on what happened last night on Empire. Let's get to it.

We start the episode with flashback to Cookie in the courthouse before they read the verdict in her trial. She's giving Lil' J. Blige realness with a blunt cut, blonde asymmetrical 'do, big gold hoops, a skintight leopard print dress and a plush white mink (in other words, the same thing she's been wearing throughout the series). Before she goes before the court, she kisses each of her little men (yes, even baby Hakeem's soon-to-be-ungrateful little ass) before Lucious struggle serenades her with a few words from one of his old hits, "You're So Beautiful." [Sidenote: When will Empire finally decide if Lucious was a singer or a rapper? Apparently he was the hardest of gangsta rappers, but he was singing far too many un-gangsta love ballads for that to have been believable.]

We then open on Lucious and Cookie in post-coital bliss after their tryst. They're reminiscing on just how good it was, and Cookie lets Lucious know that if he wants more, then fake-ass Halle Berry has gotta go. She also plays into his ego, offering Lucious a way to musically preserve his legacy with a collaboration between him, Jamal and Hakeem on an update of "You're So Beautiful." More struggle singing ensues, but luckily Cookie shuts it down real quick with an ultimatum: "You want Cookie's nookie, ditch the bitch." 'Nuff said. Lucious promises to drop Boo Boo Kitty, but somehow we doubt that's actually gonna happen.

Meanwhile, Hakeem is in church confessing his sins. No, he's not repenting for infecting our ears with "Drip Drop" a few episodes back, instead he's praying for A Pimp Named Slickback's full recovery. Jamal walks in to meet up with little bro, but feels weird that they're prepping to record a family song when they should be focused on spending what little time they have with dear old Pops. "All dad cares about is making music and money, you know that," Hakeem says, at which point we start to ponder if we want to live in a world where Hakeem is the wise and reasonable one. He continues his sage streak, though, coaching Jamal about his strained relationship with Lucious and telling him not to hold on to his grudges. Who is this person and what has he done with Hakeem? Jamal takes his advice a little too far, deciding to not come out, or at least not until his father passes. Yeah, that should work out well for him.

In the studio, it's one big happy family with Jamal and Hakeem recording the song. The vibe is so nice that even Cookie and Lucious get in the booth to sing. While it gives us the warm and fuzzies, all these good vibes are killing our drama high. Luckily for us, Andre is looking on at the love fest and silently brooding in the back as ominous music plays. Wonder what he's plotting now that it seems he's the odd man out.

Back in Lucious' office, we see the mogul meeting with filmmaker Ryan Morgan (guest star Eka Darville) about filming the recording of the legacy project (because when you own the label, I guess you can just skip the development stage and go straight into execution). He also tasks Ryan with filming what we assume is his annual white party. Just as Lucious and Ryan shake on it, in walks Fake-Ass Halle...we mean Boo Boo...err, umm, Anika, and she looks none too pleased. While we assume that her attitude is concerning Lucious' dip into the Cookie jar (we imagine coming home to your fiancé smanging his ex-wife on your Egyptian cotton sheets would leave anyone feeling some kinda way), she first questions him about Lucious having her father commit fraud by giving him a clean bill of health. While Lucious tries to win the gold in backpedaling, Anika hits him with the hee and asks him why he was slipping it to his ex. This results in the second ultimatum in the first 10 minutes: Anika wants to get married. TOMORROW. Well damn. Like any seasoned playa, though, Lucious talks her into pushing it back a week, but he has to make the announcement at the white party while Cookie is present. This won't go well.

Andre and Vernon, meanwhile, are still plotting how to make Andre Empire's CEO, especially after he felt left out of the cuddly family moment back at the studio. They devise a plan to make Andre interim CEO and decide to start swaying board votes in his favor. Andre decides to deploy his secret weapon, his wife Rhonda. He wants her to use her sex as a weapon, no House Party 3.

Back in the studio, Hakeem the Brat returns and starts talking left to Cookie after she gives him some advice. Lucious improvises a Dr. Phil moment between them, where Hakeem reveals he feels like Cookie loves Jamal more than him. Cue the world's smallest violin. Cookie gets all motherly and Hakeem stops acting like a brat, but we just want the tension back, dammit. Instead, we get a moment between Jamal and Ryan, who definitely have a chemistry, enough so that Ryan asks Jamal out for a drink. Hey now! Jamal advises Ryan to hide his sexuality from Lucious, but Ryan let's Jamal know that if Lucious Leftfoot has a problem, he can kiss his ass. Ryan, I'm sure Jamal would be happy to do that himself. Speaking of kissing, Lucious and Cookie are back in the studio and acting like horny teenagers. After getting rebuffed by Cookie, Lucious plays the "ALS Flare" ruse to get the drop on her and they end up getting sexy on the soundboard as the verse their son sings plays in the background. Yes, we feel a little uneasy about that, too.

Andre and Rhonda arrive at the house of board member Janet Blakely for dinner and possibly more, an arrangement that Andre thinks will make him a lock for interim CEO. There's only one problem, the former supermodel boardmember is married to what looks like Benjamin Franklin's younger brother in a wheelchair. This is gonna be a long night, one that Rhonda needs a few drinks (and maybe a bib?) for. In Hakeem and Camilla land (here we pause to remind you again that Camilla is played by Naomi Campbell...it boggles the mind), she gets all in Hakeem's head and says that he should be last on the song because he's the best. Lord. Back at the Blakely's, Andre and Rhonda get a lesson on ALS and a lewd mention about maintaining an erection even after being in a wheelchair, prompting Rhonda to throw up in her tossed salad. We feel you, girl. With that plan 86'd, Andre calls another board member and seemingly locks up the vote. But Rhonda has grown weary of being his "geriatric whore" and lets him know as much. Oop there it is.