Rihanna Rocks Out With Kanye West & Paul McCartney For ‘FourFiveSeconds’ 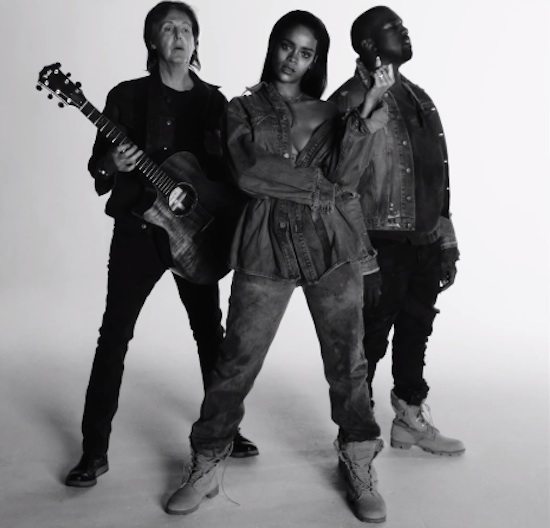 Before you get the chance to forget about Rihanna’s brand new star-studded single “FourFiveSeconds,” the Bajan pop star is striking while the iron is hot with its music video. Featuring the song’s special guests, Kanye West and Paul McCartney, the black and white visuals plays out like a vintage GAP ad as each artist appears in front of a white backdrop wearing layers on top of layers of denim. This clip is equally as simple and stripped down as the song. Kanye and Rihanna, who are now rumored to be preparing to embark on a joint tour, show off their best expressive performances while Sir Paul looks as cools as he possibly can in the background while jamming out on his guitar. Rihanna looks and sounds better than ever here. If she’s offering this much energy on stage this time around, we may actually be interested in seeing her show.

If you’re loving what this unexpected trio is serving, be sure to tune into 57th annual GRAMMY Award broadcast this coming Sunday, as it has just been announced that Rihanna, Kanye and Paul will be joining this year’s long list of performers and gracing the stage to perform this very song.