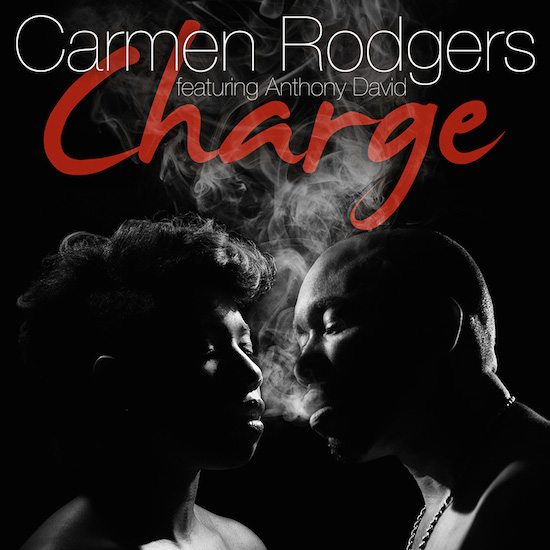 Carmen Rodgers' third studio album has been a long time coming, but Stargazer's release is imminent. This album was already on our radar to check out after hearing the tracks "Make a Way" and "Heartless," but now with this third preview for the new single "Charge," Stargazer has skyrocketed to the top of our shopping list. After listening to this enchanting duet between Rodgers and Anthony David that SoulBounce is proud to world premiere on our pages today, we suspect that you'll feel the same.

"Charge" finds good friends Rodgers and David playing the roles of two souls who can't deny the chemistry they share and the love they feel for one another. It's in their eyes. It's in their touch. It's in their kiss. What's happening between these two lovers is electric. Though not autobiographical, these two sing with a passion and urgency that makes it feel oh-so real.

Co-written by Rodgers and frequent Timbaland collaborator Daniel Jones, who also produced the song, "Charge" is both lyrically and musically engaging. After an intro filled with strings and a fleeting sax, Anthony takes the lead, singing to Carmen before she joins him on the chorus. From there she takes control of the second verse until they unite on the bridge through the outro. Rodgers and David's voices --her range and his rasp-- complement each other and blend together beautifully. "Charge" is a romantic excursion along a winding road to love with Carmen Rodgers and Anthony David as our guides.

A music video has already been filmed for "Charge" (check out Carmen and Anthony getting cozy on set), so look out for that to premiere soon. Before we get to feast our eyes on those visuals, Stargazer will be in our hands sooner than that when it's released on Tuesday, February 17th. Pre-order the album on iTunes now, or get your hands on Stargazer early as one of many perks with a contribution to Rodgers' Pledge Music campaign.