Stevie Wonder Honored By The GRAMMYs With Star-Studded TV Special 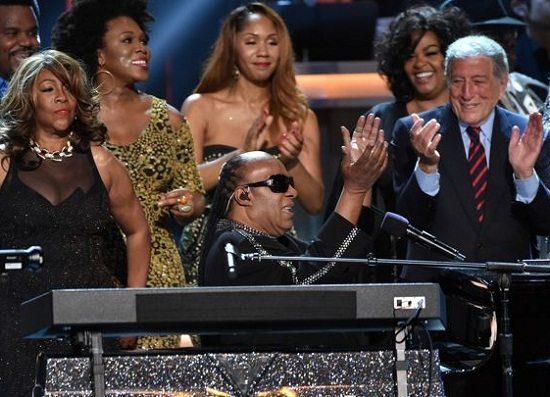 Though the GRAMMY Awards took place on Sunday, the real show seems to have taken place the following night when the organization paid tribute to Stevie Wonder's legacy with the concert "Stevie Wonder: Songs In The Key of Life – An All-Star GRAMMY Salute." The star-studded event took place before a sold-out audience at Nokia Theatre L.A. Live and featured appearances by over 20 celebs, who were on hand to fete Wonder. Hosted by GRAMMY host LL Cool J, artists such as Babyface, Beyoncé, Janelle Monáe, Jill Scott, India.Arie, Pharrell Williams, Jennifer Hudson, Lady Gaga, Gary Clark Jr., John Legend and more took the stage to perform their versions of Stevie's hit songs. Other celebs on hand for the big event included Maya Rudolph, Mary Wilson, Jason Derulo, Jamie Foxx, Gladys Knight, Tyler Perry, Craig Robinson and Stevie's daughter, Aisha Morris, who teamed up with Ne-Yo to perform a medley of her father's hits.

While most of the artists pairings make sense, there are several that may have to be seen to be believed. There are several, like India, Janelle and Jill performing "As" that leave me bubbling with anticipation. However, knowing that Mrs. Carter takes on not one, but THREE of Stevie's classics ("Fingertips," "Master Blaster" and "Higher Ground") while others like John Legend only performed once has me giving the show's organizers some serious side eye, especially following Beyoncé's controversial take on "Precious Lord, Take My Hand" during the previous night's festivities.

My personal reservations aside, for the most part, the lineup seems to be pretty intriguing to say the least. Tony Bennett singing "For Once In My Life," Lady Gaga singing "I Wish" and Andrea Bocelli singing "I Just Called to Say I Love You" definitely have my interest piqued. And of course, what Stevie Wonder tribute is complete without the man of the hour taking the stage, receiving several standing ovations after his surprise performances of "Superstition" and "You Are the Sunshine of My Life." Lucky for those of us who weren't in attendance, CBS will air the two-hour special on Monday, February 16 from 9-11 p.m. ET/PT. Peep the once-in-a-lifetime roster below and be sure to set your DVRs for this star-studded show.

Beyoncé "Fingertips"
Beyoncé & Ed Sheeran "Master Blaster (Jammin')"
Beyoncé, Gary Clark Jr. & Ed Sheeran "Higher Ground"
Tony Bennett "For Once In My Life"
John Legend "I Believe (When I Fall In Love It Will Be Forever)"
Annie Lennox "My Cherie Amour"
Lady Gaga "I Wish"
Andrea Bocelli "I Just Called To Say I Love You"
Babyface & Ariana Grande "Signed, Sealed, Delivered I'm Yours"
The Band Perry "You Haven't Done Nothin"
Ed Sheeran "I Was Made To Love Her"
India.Arie, Janelle Monáe & Jill Scott "As"
Pharrell Williams & Ryan Tedder "Don't You Worry 'Bout A Thing"
Jennifer Hudson "All In Love Is Fair"
Aisha Morris & NE-YO "Isn't She Lovely"
Stevie Wonder "Contusion," "Sir Duke," "You Are The Sunshine Of My Life," "Ribbon In The Sky,"
"Overjoyed," and "Superstition"
Stevie Wonder & Ensemble "Happy Birthday," "Another Star"