Tinashe Gets ‘2 On’ In Sydney, Australia 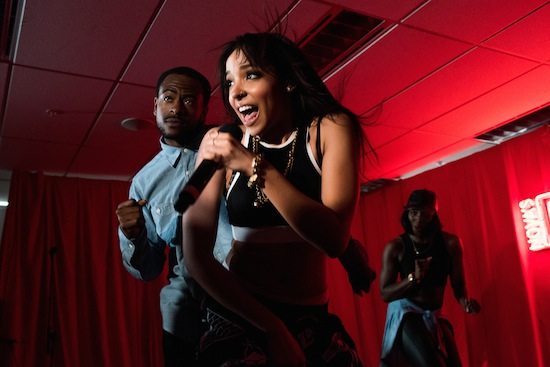 R&B’s reigning princess Tinashe has made quite a mark since the release of her debut album, Aquarius, in October last year. It’s little wonder, with her undeniable sex appeal, sultry vocals and hard-hitting dance moves captivating a new generation of R&B lovers and seeing her tour the world in support of the release. Most recently the singer hit Sydney, Australia to perform to a sold out crowd at The Metro Theatre where Tinashe lived up to the hype and then some.

Setting the scene and getting the crowd nice and toasty was Australian newcomer Thandi Phoenix, an aqua-haired, quirky chanteuse. Effortlessly commanding the stage with her electro-infused R&B that had the young crowd screaming as if she was the one they’d been lining up for hours to get a glimpse of, Thandi was an unexpected treat. Where usually the opening act is mismatched and spends their short set trying in vain to win the impatient crowd over, Thandi glided in with her drummer and keys player and instantly cast a spell on the full house without anyone being wise to what had just happened. She had them hook, line and sinker. Well played, Thandi, well played.

While you’d be forgiven for thinking throughout Thandi’s performance that the crowd would be satisfied with just her performing for the rest of the night, it was clear immediately after she finished why they were really here, as they excitedly chanted, “Tinashe! Tinashe! Tinashe!” Before long their chanting prayers were answered as the part tom-boy, part sex-goddess took to the stage simply clad in red jacket, pants and bra top with two male dancers and her drummer.

Launching into tracks from her debut such as "Pretend" and "Bet" and her from her three previous mixtapes, Tinashe showed why there are the comparisons to the late, great Aaliyah as well as Ciara (who coincidentally is also touring Australia this month). Her dance moves where high energy, while her vocals had the perfect balance of suggestive sensuality with a dash of street sass. Yes, she’s definitely no Ledisi or Jazmine Sullivan vocally, but then heartfelt, soul-baring music is not Tinashe’s specialty so you’d be silly to come to this show expecting to be moved in that way. This was all about R&B with a heavy dose of pop and pure entertainment, and entertain is what she continued to do, as she lost her jacket and gained two female dancers.

Tinashe did not miss a beat throughout the show, I felt exhausted just watching her and her four dancers expertly navigate the stage.The only person who made me feel more tired was her drummer, who held it down all night and finally had his chance to shine towards the end with an epic drum solo that somewhat redeemed the fact that the rest of the music was supplied by a backing track.

The visuals accompanying the performance showed footage of a young and adorable Tinashe singing and of her life on the road. It was a sweet, endearing touch, which just as easily felt gimmicky when the visuals frequently plugged her CD and reminded us it was "available now." Subtle? Not so much, but then the Tinashe brand is one that clearly know its market well and wants to make sure it reminds them that you need the merchandise if you want to emulate Tinashe, which many of the young girls wanted to, while their boyfriends simply wanted to be with Tinashe. Hate to break it to you, but you need the merch to stand a chance there too, guys.

So with another reminder to hit the merch stand, the fast-paced show was over, but not before a little honest advice was given out by Tinashe after closing out the show with the smash hit “2 On.” Thanking the crowd for being there, Tinashe kept it real with the motivating words to, “Go out and f**kin make it happen for yourself!” I had little doubt that purely because Tinashe said it, this young crowd would do just that, and that can not be a bad thing.