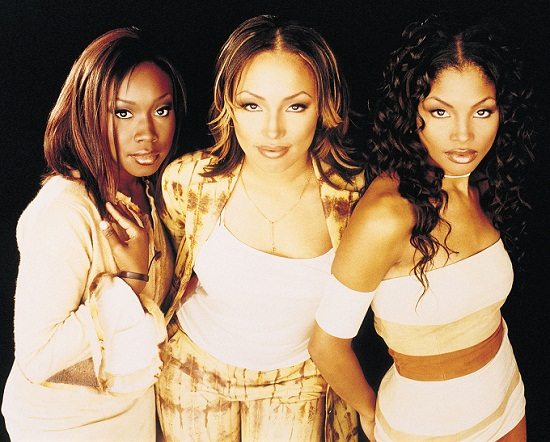 Songs with that Missy Magic: “Steelo,” “Where My Girls At?,” “Gotta Leave”

Named for an area code in their home state of Nevada, 702 was one of the biggest girl groups of the '90s, thanks in no small part to the musical genius of Elliott. When the girls needed a hit single for their debut album, they enlisted the up-and-coming songwriter and artist. Missy added her “Hee, hee, hee, hee, how!” and songwriting skills to the trio’s first single, “Steelo,” putting them on the map, along with writing and co-producing three other tracks on to their gold album, No Doubt. The ladies later contributed to Missy’s debut album on the song “Beep Me 911.” Used to getting cheese on their whoppers, the girls enlisted Missy for another hit, “Where My Girls At?,” which was on and popping on Billboard and Total Request Live in the summer of 1999.

While the girls never reunited with Missy in the new millennium as a group, Meelah Williams, did provide vocals to the Missy single, “Take Away,” back in 2001. The group split up for a bit, with sisters, Irish Grinstead and LeMisha Grinstead finding a new lead, and Meelah working under the tutelage of Faith Evans for a few years. The group later reunited for their third album, Star, but failed to achieve notoriety for the well-reviewed album. Not much has been heard from the girls since, except for Meelah who has a child with Musiq Soulchild and stars on R&B Divas: Atlanta.