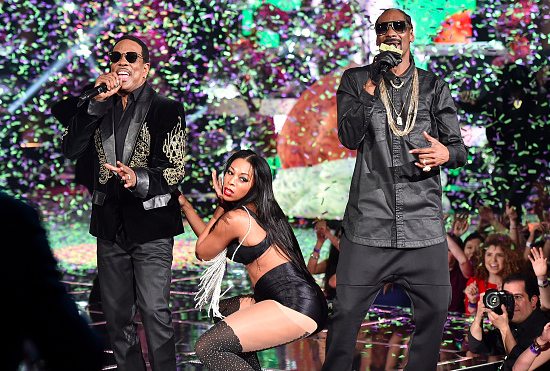 Everyone's favorite uncles -- Snoop Dogg and Charlie Wilson, that is -- closed out the 2015 iHeartRadio Music Awards in grand fashion last night with a performance of their groovy new single "Peaches N Cream." The iHeartRadio Music Awards are rarely on our must see TV watch list, but that wasn't the case this year with artists who we actually wanted to see perform on the lineup. After Rihanna and Jamie Foxx with Chris Brown injected some R&B into the proceedings, it was Snoop and Charlie's turn to funk things up, which they did like only they can.

Snoop rapped and Wilson sang while a lone female dancer tastefully twerked, dropped it and popped it along with the music. She had some competition, though, from the Queen of the Rhythmless Nation, Taylor Swift, who was on her feet in the audience and dancing off beat as per usual. That distraction aside, Uncle Snoop, Uncle Charlie and their provocatively dressed companion had our undivided attention and had us two-stepping in front of our TVs. If you missed the fellas in action during their first live televised performance of "Peaches N Cream," then get your fill right here.