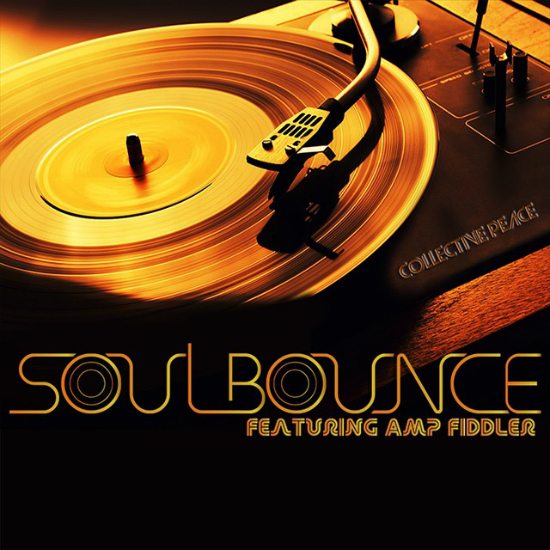 Fresh from celebrating Detroit Day on March 13th, the city of Detroit has a lot to be proud of, namely its rich musical heritage that has shaped soul and R&B music. From the bygone days of the Motown era, that legacy continues today with numerous acts proudly repping The D, such as Kem, Dwele, Zo!, Monica Blaire and Brandon Williams. There are so many more artists of note to be found in Detroit, including our latest discovery, Collective Peace. They have caught our attention and our admiration with their brand new single, featuring fellow Detroiter Amp Fiddler, with the awesomely named "Soul Bounce" that we are world premiering right here on SoulBounce.  Needless to say, we've found our new theme music -- and so will you.

Collective Peace's story is equally as intriguing as their new song's title. This band of musicians led my husband-and-wife team LaDarrel “Saxappeal” Johnson and LaKeisha "Ideeyah" Johnson were brought together to perform at the annual Dilla Day celebration in Detroit one year. They had such a great synergy and played so well together that the audience wanted to know their name (and to hear more, of course). Saxappeal told the crowd that they were simply "a collective piece of musicians," and Proof's mother who was in attendance yelled out "Collective Peace!" as their name. The moniker stuck, and a band was born.

Fast forward to today, and Collective Peace has evolved from individual musicians on a gig into a tight seven-member unit. The soul fusion band is quite in demand on the Detroit music scene, and they are looking to expand their reach with the release of their debut album, Introducing Collective Peace, this spring/summer. One listen to their single "Soul Bounce," and it's clear that they will have no problem gaining new fans. Maybe we're a little biased, but aside from the excellent song title, "Soul Bounce" is a bona fide jam.

Amp Fiddler kicks things off on the mid-tempo track as he lovingly sings about his "soul mate for life" who makes his "soul bounce tonight" while the band shows off, especially the percussionist and horn section. Heavenly harmonies come into play on the pre-chorus and chorus before Ideeyah brings her feminine energy to the second verse to echo Amp's sentiments. Rapper KetchPhraze bounces into earshot on the bridge with a few cheeky bars to bring the groove home. "Soul Bounce" isn't just our new theme music, but it's also a new way to describe that one person who does it for you like no one else and makes you fall in love every day. We'll two-step to that!

If you are loving "Soul Bounce" as much as we are, then make haste to make a purchase on Amazon, iTunes or your digital retailer of choice to add this one your collection, and look out for Introducing Collective Peace in the coming months.