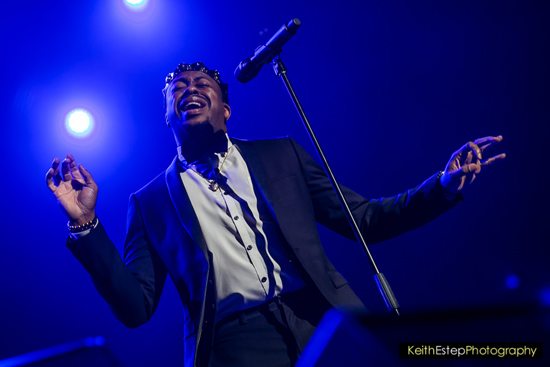 The Intimate Truth Tour's Baltimore, MD tour date was sold out, and the packed house at the Modell Performing Arts Center at The Lyric was the scene where it all went down on Sunday, March 15, 2015. After Leela James warmed everyone up with her rip-roaring opening set, Raheem DeVaughn came on to set everyone on fire -- especially all the ladies.

The Love King was in rare form as he began his portion of the show seated on a throne with a bedazzled crown on his heard. The only thing missing was a long cape and scepter, but otherwise he was in full character and dressed to the nines in a tuxedo. DeVaughn kicked off his set with the heaviness of "Bulletproof," but the mood got considerably lighter and sexier as he sang selections from his new album, Love Sex Passion. The classic soul sound of "When You Love Somebody" segued nicely into the anthems "Woman" and then "Queen." By the time he did tributes to the slow jams of the '70s, '80s and '90s, Raheem had the audience hanging on to and singing along with his every word.

DeVaughn's Love Sex Passion single "Temperature's Rising" went over well before he reached back to his first album to sing the fan favorite "You." Raheem ended his set with "Ridiculous," which sounded ridiculously good, and "Customer," which ended his show on a feel-good high note.

We've seen Raheem DeVaughn perform live too many times to count, but this was by and far one of his tightest and best shows we've seen him put on.