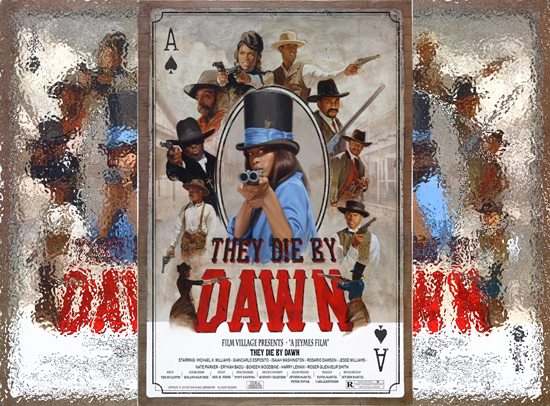 When TIDAL, the new audio streaming service from Jay Z and friends, premiered, one of the major selling points of the service was the “exclusive content.” While there was some debate about the cost of the service and the demand for “hi-fi” sound, the type of content that would be available left a huge question mark over our heads. At the most, we were expecting to get a few behind-the-scenes clips or that rumored Jay Z and Beyoncé album. When the shoe finally dropped, we got the rare, intimate clips; a reissue of Daft Punk’s Electroma film; a video of Beyoncé singing a new song, “Die With You,” as Jay recorded it on his iPhone and, most interestingly, the short film They Die By Dawn.

Originally premiering at SXSW in 2013, director Jeymes Samuel, who goes by the pseudonym The Bullitts, collected a who’s who of Black Hollywood, along with one Ms. Erykah Badu, to tell the real life stories of African-American cowboys and cowgirls. The film was an accompaniment to Samuel’s album, They Die By Dawn & Other Stories. Samuel told Jay Z’s Life+Times in 2013, “We got Black Wall Street (Langston, Oklahoma). All of these places that are criminally unsung. So I set the story in 1890 and I threw everyone in it: Ben Hodges, Rufus Buck, Nat Love, Bill Picket, Stagecoach Larry, Jordan Anderson, etc.”

The film itself is great. Set against the backdrop of Langston, Oklahoma, our protagonists converge on the town for love, money and revenge. The story is engaging from beginning to end, and with actors as such as Isaiah Washington, Rosario Dawson and Giancarlo Esposito, you can expect everyone to deliver their lines with aplomb. The premise almost begs for this to be an ongoing series on HBO and not just a 50-minute film.

While They Die By Dawn is entertaining, what it represents is far more interesting. For one, we know more about the exclusive content we can expect from TIDAL. We also know that if we go digging through Jay Z’s Life+Times, we can get a better idea of the content that might be in the pipeline. Finally, while TIDAL is described as a music streaming service, we should probably take music out of the description. Music is Jay Z’s bread and butter and is the logical “gateway drug" to get people hooked on the service (okay, mildly interested). However, TIDAL represents a unique 360 distribution model for music, film and television. In an interesting way, Mr. Carter has taken an idea Dame Dash proposed while promoting his Loisaidas film and made it a reality.

Watch the trailer for They Die By Dawn below, and check out TIDAL if you would like to view the complete film.