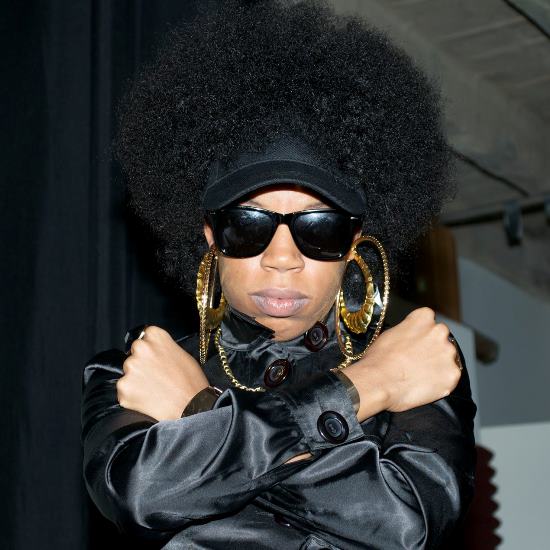 Earlier this month, we heeded Georgia Anne Muldrow's call to "dance with me" as we fell under the spell of "Ankles," our first* official preview from her upcoming debut rap album, A Thoughtiverse Unmarred. Granted, we already got a taste of her MC skills on last year's Ms. One EP, but a full-length album proves that Georgia has a whole lot more to say through rhyme and verse.

Her latest release, "Great Blacks," debuts by way of video. Shot mostly on a rooftop, the visuals are simple yet engaging, thanks to the charismatic energy of the femcee. Rocking gold hoops and chains, and backed by her posse (which includes her partner in life and music, Dudley "Declaime" Perkins), Georgia goes full-on "hip hop mode" for the Jay Brown-directed clip. Her easy-going flow glides effortlessly over Chris Keys' jazzy production, paying homage to ancestors as well as those who helped her develop a higher sense of consciousness. It's not a boastful rebuke -- as she herself "used to roam wild on a one-way street." -- but moreso a challenge to embrace the greatness within.

Check out the visuals below, and let the positive vibes infuse your entire being. Having now previewed three tracks from the set, we're starting to get a pretty good idea of what the album holds and look forward to hearing more. "Ankles" and "Great Blacks" are currently available for purchase on iTunes. You can also pre-order A Thoughtiverse Unmarred ahead of its May 19th release date via BandCamp or iTunes.

* "Pop Iconz" was not initially released as an album single, when it dropped last year. However, it is included on the current tracklisting for the upcoming album.