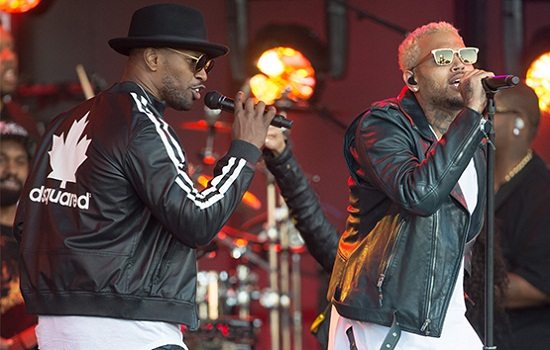 Jamie Foxx is prepping to release his first solo album in five years, Hollywood, and he went to Jimmy Kimmel Live! to give fans the lowdown. Sitting down with the talk show host, he broke down why exactly he named the project Hollywood and revealed the album's cover in the process and even provided the audience with musical interpretations of Tinder profiles.

But he also took some time to rip up the stage with his latest song, "You Changed Me." The duet with Chris Brown had its premiere at the iHeartRadio Awards, but it seems like it really came to life here. Jamie started the performance sitting at the piano surrounded by scantily clad dancers. But soon, he was up from the keys and moving about the stage. The energy was only heightened when Breezy (and his Sno-Cone-colored hair) moonwalked onto the stage before kicking off his rather explicit verse of the song. From there, the two seemed to just have a good time on stage, clowning around and showing out for the fans.

Jamie played coy when asked for Hollywood's release date, but being that we already have the cover and a single, it can't be too long before we get to hear what Mr. Foxx is bringing to the table. Until then, check out the performance right here (and follow this link to see a fan-captured video of another performance Jamie did with Kid Ink that we presume JKL! will air at a later date).