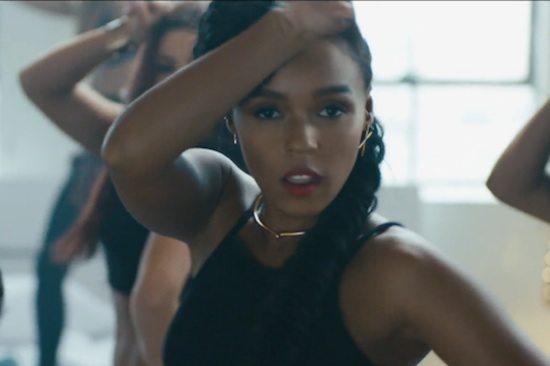 Just when we thought we had Janelle Monáe figured out, she switched it up on us with the recent release of the edgy single "Yoga" featuring Wondaland newbie Jidenna from the forthcoming compilation, The Eephus. Janelle let her hair down and got a little ratchet on the bass-heavy trap cut, singing lyrics like "get off my areola" and other eyebrow-raising lines before Jidenna added his pearl-clutching rap like a cherry on top.

Oh, but you haven't heard -- or make that seen -- anything yet, folks.

Janelle turns up the ante in the "Yoga" music video and shows us another side to herself altogether. The clip starts off innocently enough, with the camera approaching the singer from behind as she levitates in her bedroom while seated in a Sukhasana yoga pose.When director Dave Meyers pans around to her face, she opens her eyes and commands in a chopped and screwed voice to "Let your booty do that yoga." As good as Janelle is looking, her wish is our command.

The "Yoga" visuals find Ms. Monáe at her sexiest. She breaks out of her usual uniform of a black and white suit and shows not only some skin but her curves in a skimpy tank and strategically ripped jeans. Her face is sweetly beat to perfection with a fierce red lip, and her hair is laid in a long, thick fishtail braid that wraps around her body and goes past her waist. Is it hot in here, or is it just Janelle Monáe? It's Janelle. Trust and believe, it's definitely Janelle.

Monáe is working her revamped look and working it out in the video as she body rolls and drops down low and sweeps the floor with it in front of a mirror and dances around her bedroom with her girlfriends. By the time the chorus kicks in, so does the group choreography, and the ladies all do a combination body roll and snake hybrid amongst other exercise-inspired moves.

Janelle isn't done with her instructional video, though. The scene switches to a yoga studio filled with women, and Monáe swaggers around the room in tight white leggings and a gold crown cocked to the side perched atop her head. She brings the body roll back yet again while the women around her bend, stretch and twerk it out.

Jidenna finally joins in on the video's fun, with the scene switching to him in a diner getting served by two women. The setting seems kind of random compared to the rest of the video, but Jidenna's charm and sartorial elegance quickly take your mind off of anything else. As he wraps his verse up, a group of admirers gather outside the restaurant's window before bum-rushing in, led by Janelle. She takes over the spot with her peeps, and they all commence to turning up -- and body rolling for their lives.

Once again, Janelle Monáe has delivered a fly-ass video that you'll find it hard to just sit still and simply watch. Make sure to stretch before you watch "Yoga" and join in on Janelle's dance party. There's more where "Yoga" and Jidenna's "Classic Man" came from when The Eephus soon drops.


TAGS:  Dave Meyers, janelle monae, Jidenna
Previous: Morning Soul: Senorita, Don’t You Know How Much I Need You? Next: Taraji P. Henson Brings The Funny, The Gospel & The Cookie To ‘Saturday Night Live’