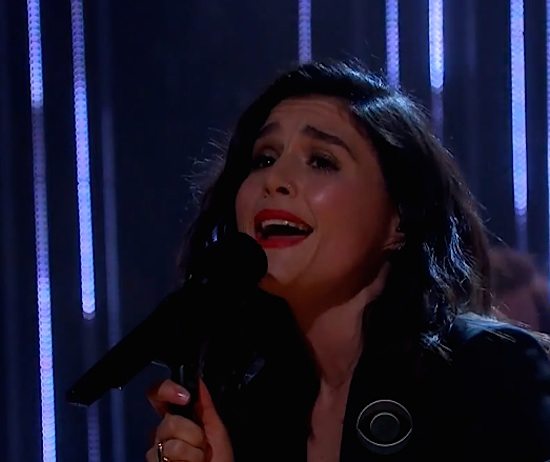 The new kid on the block on late-night TV is British actor/comedian James Corden who recently took over hosting duties of The Late Late Show from Craig Ferguson. Unlike Ferguson, Corden is actually funny and his after hours talk show is pretty enjoyable. If you haven't seen it yet, then you've missed out on guests like Mariah Carey, Chris Rock and Kevin Hart and Corden's equally hilarious bandleader Reggie Watts. And if you didn't tune in last night, then you missed Jessie Ware and her band commanding The Late Late Show with James Corden stage with a performance of her song "Say You Love Me."

Jessie brought the Tough Love ballad to life and sounded as good if not better than the recording. Dressed in a black pantsuit and rocking a fierce red lip, Ware sold this with her facial expressions, which ranged from placid to pained. She was both a joy to listen to and watch, which anyone who's seen her in concert can attest to.

For more Jessie Ware live, you'll have to catch the songbird in Europe, with various dates scheduled across the continent in the coming months. In the meantime, watch Ware soar with "Say You Love Me" right here.