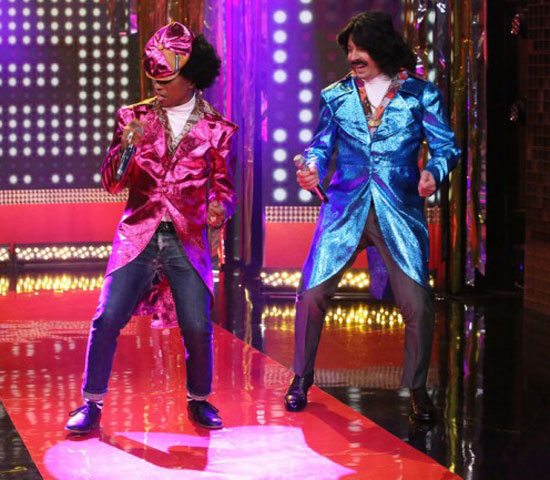 Pharrell Williams joined Jimmy Fallon last night on The Tonight Show Starring Jimmy Fallon and what followed was a hilarious nod to the '80s.  Reprising Fallon's running American Power Hour skit, the two music lovers played R&B duo Afro & Deziak, who never existed but if they did we're pretty sure they would've been a hit. Dressed like two pimps from the '70s, Afro (Pharrell) and Deziak (Jimmy) were decked out in white turtlenecks and pink and blue lamé dreamcoats. They played their characters to the fullest extent, singing unreasonable requests to a significant other like paying their rent and planning their boss' daughter's baby shower. The first performance had the two getting down to a song called "Girl I'm Gonna Get You In The Mood." This was just the beginning because in typical Tonight Show fashion, the skit turned into three performances.

While they chuckled through the skits, we wondered when the two would drop their first official single. Afro & Deziak could make it big, but we'll wait to see how serious Pharrell and Jimmy are about taking that leap of faith. Watch the clip of Pharrell and Jimmy performing, and let us know if Afro & Deziak get you in the mood or have the opposite effect.