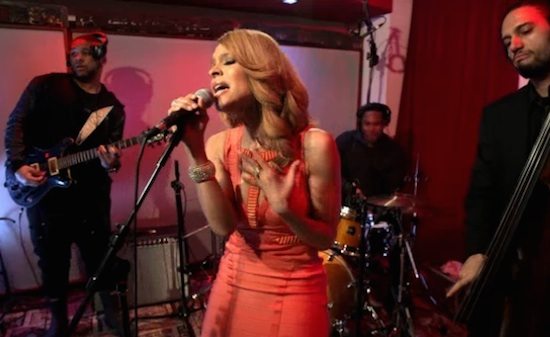 In case you didn't get the memo: Black. Girls. ROCK!

Continuing its tradition of inspirational spotlights and amazing musical performances, there's no doubt that last night's airing of the Black Girls Rock! 2015 awards show on BET was must see TV. For about three hours, as we caught a glimpse of Beverly Bond's annual event -- created to celebrate the achievements of Black women in areas like technology, education, entrepreneurship and entertainment -- there was a collective glow of pride that united us all.

SoulBounce faves like Jill Scott, Lalah Hathaway, Faith Evans and 2015 honoree, Erykah Badu, were on hand to bless the stage with their musical presence. But if you only watched the broadcast airing, you missed one of the evening's best performances. Antonique Smith gave a digital exclusive performance of "Hold Up Wait A Minute (Woo Woo)" and showed exactly how she earned her recent GRAMMY nomination. Backed by a trio of musicians, the small studio space could barely contain her powerful voice or her stilleto'd strut. Antonique's voice was in top form as she gave a fiery performance embellished with the just the right amount of sass. Making good use of percussion, guitar and double bass, the band brought the funk so convincingly that you didn't even miss the organ, horns and hand claps that stood out in the original. Watch the video below, and see for yourself why this was a performance truly worthy of the BGR main stage.

Antonique's debut album Love Is Everything is scheduled to drop some time this year. Visit her website where you can sign up for her mailing list and follow her social media links for updates on the album release. In the meantime, you can purchase "Hold Up Wait A Minute (Woo Woo)" on iTunes and catch her as a featured artist on HOME, a music project created by the Hip Hop Caucus to raise climate change awareness. She also the recently rocked the SXSW music festival via the Pandora Discovery Den and is featured on their SXSW playlists.