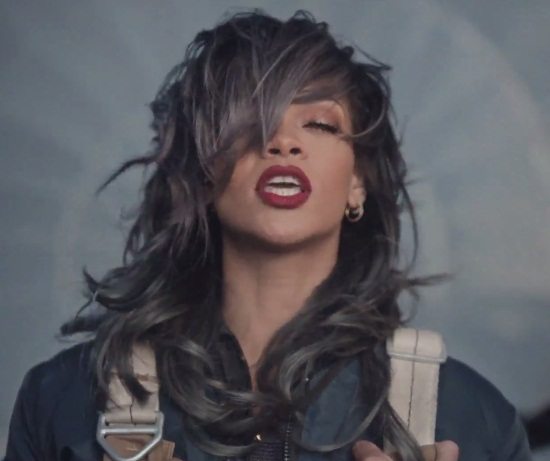 If you happened to buy into Jay Z's music streaming venture TIDAL (or just, you know, decided to give that free 30-day trial a whirl), then Rihanna's video premiere for her single "American Oxygen" is kind of old news for you. But for the rest of the world who can't be bothered, RiRi went ahead and unveiled the visuals for the track on her VEVO page today.

As to be expected, the clip features a lot of patriotic American imagery, including billowing flags, monuments and smiling, happy families. Why the proud Bajan is towing the "God Bless America" party line is never really answered, though. Still, while most people wouldn't expect Rihanna to get political — unless you're like this misguided soul who thought "B***h Better Have My Money" could be about reparations (really, girl?) — the pop star actually weaves in archival footage of protests, MLK's funeral, strikes, riots, wars and immigrants trying to cross over the American border among all the shining moments. So, while the song glorifies fighting and struggling to grab a piece of the American Dream, the video points out the harsh reality that the dream isn't exactly what it's been cracked up to be.

But, being that this is Rihanna we're talking about, there are also more than a few glamour shots of the star, including a few close-ups of her in a white tee that confirm she's definitely not wearing a bra. Oh, that RiRi. If you're a Rihanna fan or just a fan of the red, white and blue, feel free to check out the clip below.