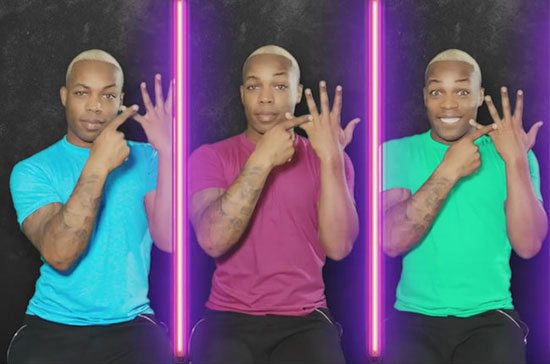 We're usually pretty tickled by actor/comedian/singer Todrick Hall's video antics, but this time he's taken on a great feat -- the Queen B and her entire solo catalogue, yes, all five albums. In his latest video, which will surely go viral, the Broadway star sings a medley of 70 Beyoncé singles, which also includes bonus tracks. With four images of himself sitting in front of a camera, each one takes turns singing signature lines from her singles while the others harmonize in the background in the ironically four-minute video. How he effortlessly moves from "Kitty Kat" to "Beautiful Liar" is indeed talent, and he does this over an ever-changing beat. Todrick uses percussion as his canvas and his voice to paint the melody for most of the tracks. The highlight of the video is when he switches to acoustic at the two-minute mark to sing a fluid melange of all of Yoncé's ballads.

The medley itself could either be its own single or a staple among a cappella groups who love mashups. The Beyhive will be pleased with this video and we guess that's all that matters. Todrick, however, has caught the eye of more than Beyoncé's fans since it looks like the actor/singer will get his own reality show on MTV this summer. "TODRICK" premieres August 31st at 10 p.m. ET, and we can't even imagine what shenanigans we'll see from the multi-talented artist. While we wait for his reality debut, if you can hear over the Beyhive's buzzing, watch Todrick's mashup of Beyoncé's hits and be sure to check out the strategic lyrics that go with it on his YouTube page.