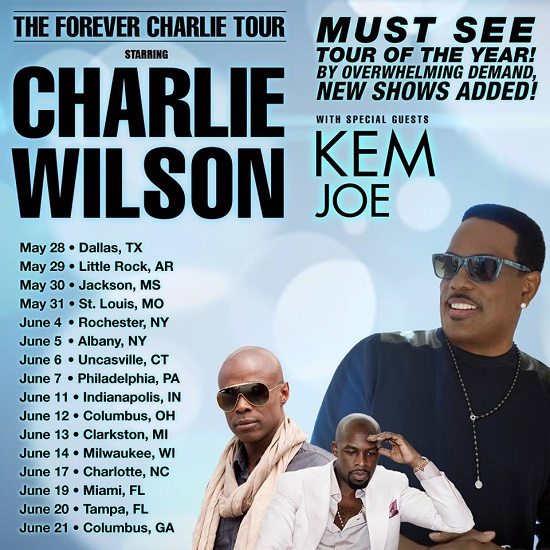 Uncle Charlie Wilson and his tourmates Kem and Joe wowed audiences when they took stages nationwide on the Forever Charlie Tour this past winter, so much so that they left fans yearning for more. Never ones to leave fans hanging, the R&B legend and his two musical peers have obliged fan pleas and will embark on a second leg of the tour.

With the success of the tour's first leg, which found the singers packing arenas from opening night in Cleveland to the tour's close in Las Vegas on March 28th, adding a second leg was a no-brainer. On top of that, Charlie's album Forever Charlie and his contributions to Snoop Dogg's latest album, BUSH, have kept his name in the air and his face on television screens since the top of the year.

Kicking off tonight in the great city of Dallas, the extended jaunt will see the trio hitting the stage in St. Louis, Philly, Indianapolis, Milwaukee, Miami and many other cities well into the month of June. If you haven't had the pleasure of checking out the sounds of Uncle Charlie and friends live (or you just want to relive the experience), you can check Charlie's website for details and ticket info and you can see tour dates and venues below.


TAGS:  charlie wilson, joe, kem, snoop dogg
Previous: Kendrick Lamar Brings ‘These Walls’ To Life On ‘The Ellen Show’ Next: Jacob Latimore Has ‘Earned’ Our Praise With This Cover Of The Weeknd