Derrick Hodge Shares His Classical Treatment Of Nas With ‘The World’ 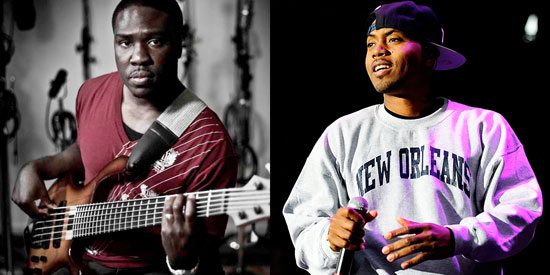 Last year, the famed Kennedy Center pulled out all the stops to launch its One Mic: Hip-Hop Culture Worldwide Festival. The cornerstone event was a symphonic concert to celebrate the 20th anniversary of Nas's debut album, Illmatic. The National Symphony Orchestra brought the music to life, but a key figure behind the scenes was none other than multi-talented musician Derrick Hodge. Blue Note recording artist, bassist for Robert Glasper Experiment, sought-after musician, composer, arranger, producer, contributor to many film scores and soundtracks...yes, THAT Derrick Hodge.

For those of us who weren't lucky enough to be in the audience, Mr. Hodge is now sharing a little taste of the magic that was created on stage that evening through the recently unveiled "roughs" of his orchestrations for "The World Is Yours." In a recent interview with Revive, the composer/arranger spoke of the inspiration that fueled his creative process, "I remember when in college, I’d stay listening to Stillmatic like it was my own story. Nas had a way with the pen that inspired me to be a storyteller, true no matter what. I didn’t realize this day would come where I’d have the opportunity to create an orchestral landscape around the original Illmatic, an album that changed hip hop in a few major ways."

Although this is an unfinished product, you can still get a pretty good idea of the greatness that took place that night. Check out the aural inspiration below and visit Derrick's website to keep up with his many projects.