Jamie Foxx Has Epic Bout With ‘The Star-Spangled Banner’ 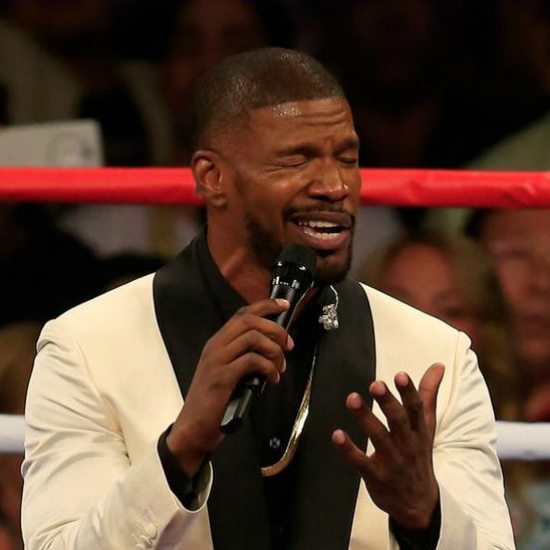 The Floyd Mayweather and Manny Pacquiao fight was quite the spectacle Saturday night. We got to see Denzel Washington expertly styled like someone’s drunk uncle, Jay Z and Beyoncé stunting on all the other celebrities in attendance, a private plane parking jam and a rather tedious fight. However, the biggest spectacle of the night was the fight between Jamie Foxx and “The Star-Spangled Banner.”

Foxx attempted to take us to church with a gospel-inspired version of the National Anthem, giving us all the vocal gymnastics of a tiny backwater Baptist church choir. The whole affair started nice enough, with Foxx even hitting a few good notes. However, towards the end the "Blame It On the Alcohol" singer turned into one of his characters from In Living Color. Just when we thought he might actually bring this performance on home, he remixed his own tepid gospel performance with a little bee-bop skat daddy crooning, complete with awkward facial expressions and hand movements. The cherry on top of the whole affair was him ending the song with “Hallelujah,” as if he knew his performance was fire. Most of us were agreeing because the struggle was over.

Of course, Twitter had a field day with the theatrics. Everyone from Robert Glasper to KISS co-founder Paul Stanley weighed in on Foxx’s butchering of the national anthem. Did he not practice? Was he called up at the last minute by The Money Team to perform? Was he distracting us from his new hairline? Did he get the heebee jeebees from the Burger King Mascot backstage with Mayweather? We may never know the answer to this quagmire. However, Foxx  is in good company, joining many notable performers such as Christina Aguilera and Roseanne Barr in ruining “The Star-Spangled Banner.”