Snoop Dogg Brings ‘So Many Pros’ To ‘The Tonight Show’ 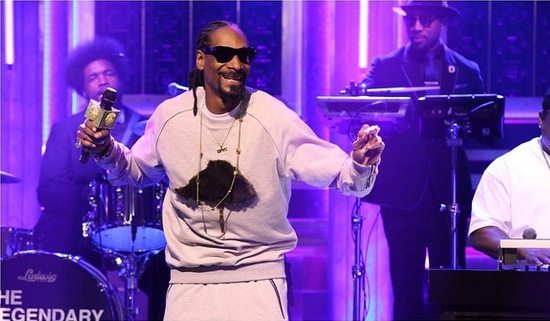 Snoop Dogg's new album BUSH is that joint (see what we did there?), and the smoked-out rapper-turned-singer is in full-on promo mode now that the album has arrived. To that effect, he stopped by The Tonight Show Starring Jimmy Fallon to chop it up with the late night host and give the masses a hit of his latest party-starting album.

While on the couch, Snoop told Jimmy Fallon about the album, with a focus on his collaboration with music legend Stevie Wonder on "California Roll." He also told him about the time that he and Willie Nelson reached for the same piece of chicken at a KFC in Amsterdam. But of the course, the night's main musical event was when Snoop took the stage to perform his jam "So Many Pros" with some assistance from in-house band The Roots. While Snoop did a pretty good job riding solo dolo, the absence of extra vocal support from Uncle Charlie Wilson (who wasn't able to perform with the D-O-double G this go' round) was noticeable, particularly on the track's bridge.

Despite the slightly bumpy performance, though, Snoop still seemed to be having a good time on stage and it surely won't stop us from bumping "So Many Pros" at the many parties to come this summer. Take a look at Snoop's performance right here.