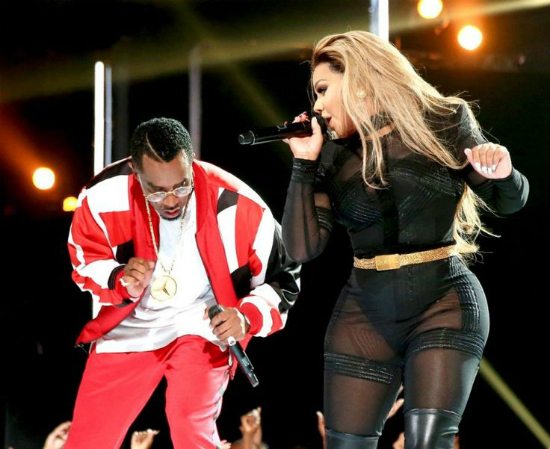 While the Janet Jackson tribute was definitely the talk of the night, BET managed to pull a fast one on the audience (at least, that is, until host Tracee Ellis Ross spilled the beans on the red carpet) and offer one of the biggest surprises of the night: Bad Boy Records' 20th anniversary performance spectacular.

The segment was rightfully spearheaded by label head Diddy, who kicked things off with "Can't Hold Me Down" before bringing out Ma$e for the seminal "Feel So Good." But the hits kept coming, with 112 dusting off the cobwebs of their raunchy track "Peaches & Cream" — though group leader Slim's voice doesn't seem to have aged as well as the party-starting song. Luckily, each artist got a short segment, and soon Diddy was on to a snippet of "I Need A Girl" before the first lady of Bad Boy Faith Evans rocked a bit of "Love Like This" and got the crowd on their feet. For some reason French Montana was invited to the festivities, effectively slowing the momentum. But it picked back up for The LOX as they rocked "All About the Benjamins," a performance that included a hilarious fall on Diddy's part (inspiring a few funny memes) and a triumphant rising from the stage by Lil Kim, who set everyone into a frenzy with her hot penultimate verse from the track.

But the show wasn't done by far. After a verse from "Mo' Money, Mo' Problems" by The Notorious B.I.G., Pharrell Williams joined Diddy on stage to perform new single "Finna Get Loose." It was a turnt up moment for sure, with everyone from Chris Brown to Janelle Monáe popping up on stage to celebrate the 20 years that Bad Boy has under its belt and look forward to the many more hits the label is sure to bring forward. Though many wondered where other Bad Boy staples like Total, Carl Thomas or Craig Mack were, on thing was certain: Bad Boy definitely has hot tracks.