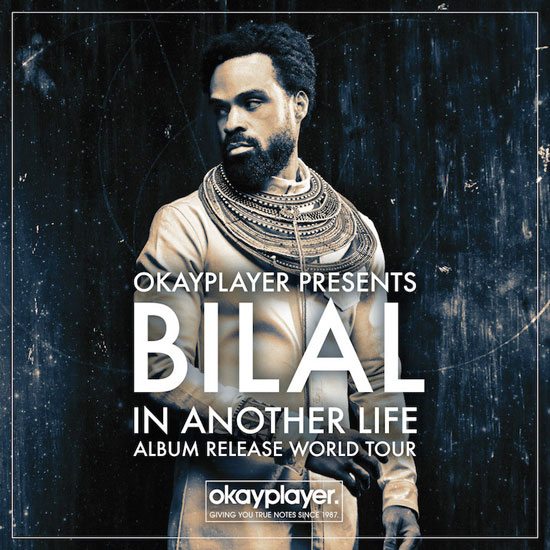 Add another concert to your summer roster. One of our favorite soulful crooners, Bilal, is taking his repertoire on the road. When Bilal announced that his album In Another Life would debut June 30th, we thanked the music angels for gifting us with more new music in 2015. Granted, we have spent most of the year listening to Bilal's vocals since he sang all up and through Kendrick Lamar's To Pimp A Butterfly LP. In May the crooner unveiled his own track "Satellites," a commentary on the state of the world. The album artwork and his first single suggests Bilal is exploring his creativity and likely taking us to a few new planets. Speaking of getting on his spaceship, his upcoming tour, presented by OkayPlayer, kicks off on June 30th in the crooner's Philly hometown at World Cafe Live. The first date also serves as his album release party and sets the pace for his performances in NYC, New Orleans, Virginia, Atlanta, and then across the water in London, Dublin, Amsterdam and Paris.

As we wait to see what cosmic heights Bilal and his music will take us, we'll keep you posted on when he adds more dates to his tour. We'll be sitting here counting down to the end of the month when we can finally jam to In Another Life, produced entirely by Adrian Younge. K. Dot and Big K.R.I.T. serve as the only guest rappers and SoulBounce fave Kimbra also lends her vocals to round out the guest appearances on the album. Look out for tickets to Bilal's upcoming shows on his Facebook page and also do yourself a favor and pre-order In Another Life now on iTunes.