Did We Deserve The Weeknd & Alicia Keys’ Performance Of ‘Earned It’ At BET Awards ’15? 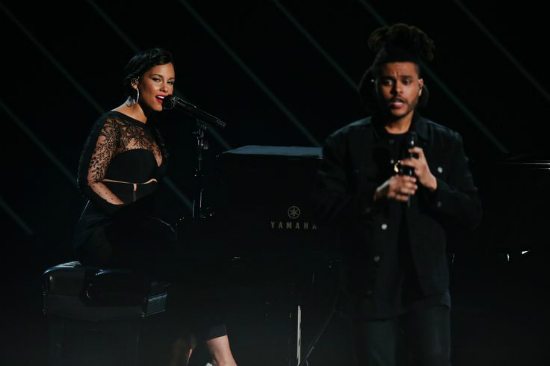 You could say The Weeknd has had a pretty successful year thus far, capped off with his hit single from the Fifty Shades of Grey soundtrack, "Earned It." With that momentum behind him, the moody Canadian crooner took the stage of this year's BET Awards to inject a bit of his signature darkness into the flashy spectacle of the show.

He kicked off his set dressed in all black and bathed in red light from the screens on stage as he performed his single "The Hills." His performance of the track was pretty good, though it lacked a bit of sparkle (even with a bit of pyrotechnics to liven things up). But the big surprise was when he brought out special guest Alicia Keys for a rendition of "Earned It." However, while we wish we could say it was a good surprise, it wasn't.

For some reason, Alicia just couldn't find the right key — even though she was playing the piano — and as a result couldn't really harmonize with Weeknd's falsetto. This resulted in a, for lack of a better term, caterwauling mess that was kind of painful to listen to. We definitely appreciate the moment that the two were trying to create, but we'll have to give this performance the nay-no.

But perhaps we're being a bit harsh. Take a peek at their performance, and let us know if you think the audience deserved what the duo gave us.


TAGS:  alicia keys, BET Awards 2015, The Weeknd
Previous: Avery Wilson Shows BET Awards ’15 That His Music Matters With ‘If I Have To’ Next: Bad Boy Records Celebrates Its 20th Anniversary With A Showstopper At BET Awards ’15