Kendrick Lamar Was Better Than ‘Alright’ At BET Awards ’15 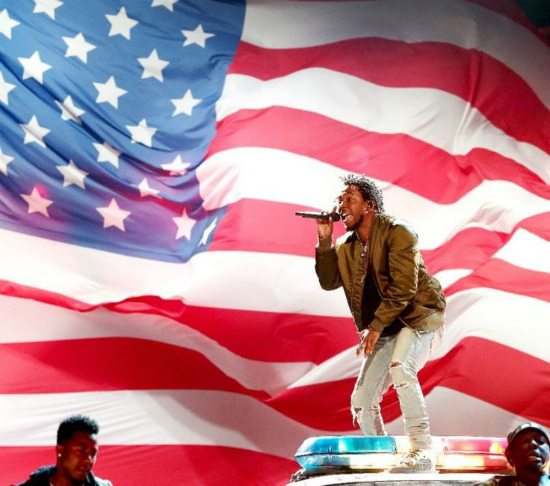 Kendrick Lamar launched his own revolution last night and thankfully it was televised. The TDE star opened the 15th Annual BET Awards standing atop of a spray-painted cop car, surrounded by dancers and with an American flag waving in the background. The first few seconds of the performance alone brought a palpable energy to the audience, who were ready to vibe along with Kendrick when the beat dropped. In the middle of his performance, a planned electrical glitch brought the title of his album, To Pimp A Butterfly, in big white letters on the screen. Once the lights were back up, more American flags were waved on stage, along with an extra army of dancers in the crowd to elevate the energy that was already on high.

As if that wasn't enough, Kendrick and his dancers broke things down for the audience once they stripped the track of its instrumentals. The dancers marched towards the star and surrounded him to create a forcefield, not that he needed recharging, all saying "Alright" in unison. They created a perfect circle around the emcee as if he was in a magical cipher we didn't want to end. Kendrick's unique delivery and verbal mastery keep his performances at the tip of our tongues when asked who was the best of the night. Known for his awards show performances, this was by far one of his best.

K. Dot's talent knows no bounds, and he consistently reminds us of this whenever he gets on the mic. Even better is that his performances have substance, and he uses minimal theatrics to get his point across. After King Kendrick assured us that we were going to be "Alright," he rightfully snagged the award for Best Male Hip Hop Artist. Watch Kendrick's performance at the BET Awards '15 right here, and let us know if he made the top of your list for the night or if he was just alright.


TAGS:  BET Awards 2015, kendrick lamar, TDE
Previous: Morning Soul: Who The Hell Is This Paging Me At 5:46 In The Morning? Next: Janelle Monáe Does ‘Yoga’ & Jidenna Drops A ‘Classic’ At BET Awards ’15