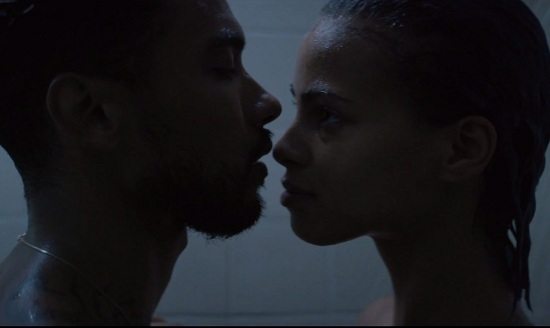 It's a good day to be Miguel. Just this morning, the singer released three new songs from his upcoming album, WILDHEART (bringing the total tracks available from the soon-to-be-released album to six). While most would've settled for getting our tongues wagging with that feat, Miguel wasn't satisfied. To that effect, he also dropped the rather steamy visuals for his single "Coffee" today as well. And when we say "rather steamy," that's putting it mildly.

The diminutive R&B star tapped a sexy screen partner to star in the clip with him, and the two make good use of the screen time. Starting with the twosome getting close in the shower, they stay barely clothed throughout the clip as they frolic with each other. Whether it be in a disheveled room only lit by a blue neon cross, among sheets fluttering in the wind or in a misty steam, they can't keep their hands of each other, touching and kissing like no one is watching. Sure, the video seems to be missing the Wale guest verse on the single, but honestly, that would just kill the vibe going on here, so it's probably for the best.

Get an eyeful of Miguel's sexy clip below and mark your calendars for June 30th, when WILDHEART arrives in stores.