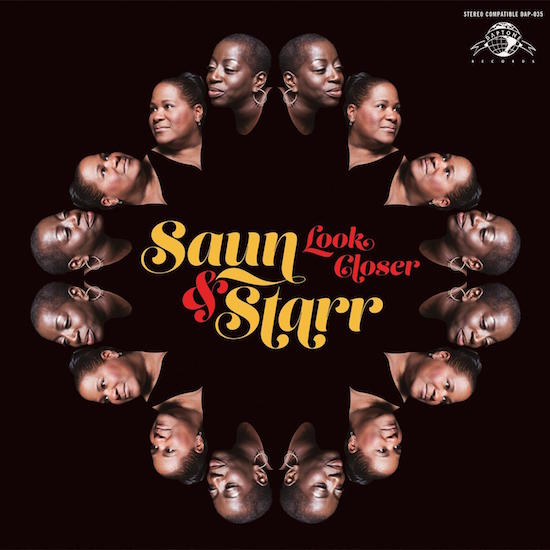 Anyone who has seen the Oscar-winning documentary 20 Feet From Stardom should know that being a background singer doesn’t necessarily mean a lifetime in the shadows, chasing the limelight forlornly or a life unfulfilled in a futile search for the stardom that sits so close to them. Judith Hill who featured in the film finds herself nestled gently under Prince’s wing, aiming to take solo flight. While Darlene Love, freed from the tyranny of Phil Spector, now takes her place as queen of an era and has new solo music in the works.

And so it is that Saun & Starr, longtime backing singers for Sharon Jones and the Dap-Kings, deliver their debut album Look Closer with their twin voices thrust center stage, aided by the ever-reliable Daptone family. There are no surprises here, for this is adorned with the same throwback soul sounds as Sharon Jones’ work featuring tight rhythm sections, punchy horns and the occasional flourish of organ. This is soul music in its most widely recognizable definition.

Album opener “Look Closer (Can’t You See the Signs?)” sets the tone perfectly with its laid-back funk groove and heartfelt lyrics. It also unsurprisingly demonstrates the delightfully harmonious way in which Saundra Williams and Starr Duncan-Lowe's voices work. “Hot Shot”'s gently chugging mid-tempo strut echoes the peacock preening of the titular character and once again sees their voices dovetailing beautifully against the classic soul sound, while twin horn lines add an extra dimension. The slinky, sinuous chorus of “Gonna Make Time” marks a well-placed change in tempo and atmosphere, and “Sunshine (You’re Blowin' My Cool)” returns once more to the mid-tempo groove that swiftly becomes standard issue for the album.

One of many highlights on Look Closer is “If Only.” A somber, stately and funereal paced lament for lost love, it ends with imploring, pleading vocals and hits the spot beautifully. Following that is a slice of Isaac Hayes-inspired soul music on "Another Love Like Mine." A thunderously simple bassline, a spoken intro and a wah-wah guitar shimmering like a pearl in the sun, all add up to a tale of lost love and betrayal told superbly.

That loose-limbed, shake-it-off soul returns on “Big Wheel,” “Your Face Before My Eyes” and “Dear Mr. Teddy.” While all of them are perfectly performed and well worth listening to, they do threaten to become an amorphous mass. Additional tempo changes or an unexpected piece of instrumentation would help separate the songs, alter their character and ensure they live longer in the memory.

The final two songs bring Look Closer home with style, though. “In the Night” ramps up the drama delightfully, with its hurried, frantic utterance of the title and “Blah Blah Blah Blah Blah Blah Blah" is brought to life by the more central role of the organ. Like the sun on a cloudy day, it pokes its welcome warmth through the arrangement and lifts it higher.

And so it is that background belters Saun & Starr get their chance in the spotlight and, by and large, take it, sing the hell out of it and leave it curled up in a ball whimpering for mercy. Everything is performed to impeccable standards. Their voices compliment and augment each other in a way that only seasoned, highly-skilled voices can and the music found on Look Closer is the perfect evocation of soul.