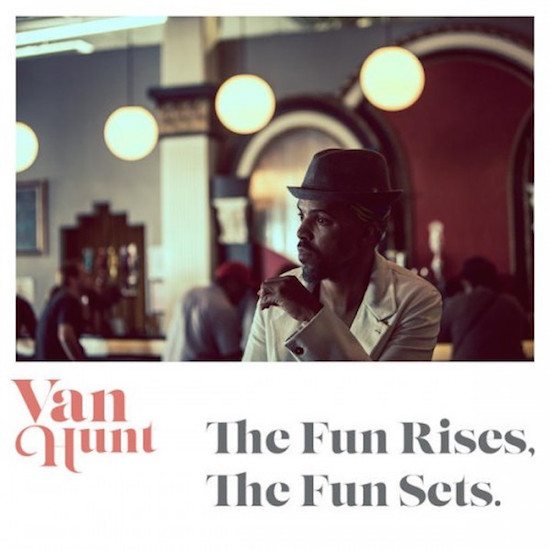 Marvin Gaye told us in 1972 that only three things were for sure ("taxes, death and trouble"), but now we can add one more to that list: the quality of  Van Hunt's music. His new album, The Fun Rises, The Fun Sets, shows that his material is as good as anybody's out there in the soul universe. He negotiates the twists and turns from funk, to rock, to soul and writes lyrics underpinned by the failure of love, intense emotional darkness and bitterness, all the while cooing away in his vulnerable falsetto. Don’t be fooled by his delicately fragile voice, though -- this is weakness, regret and naked desire exposed for our enjoyment. Hunt is a reminder of the heights that soul music reaches when current fads and expectations are thrown out of the window and individuality is prized and nurtured. This album really is that good.

Album opener “Vega (stripes on)” signifies a change from the rock infused album, What Were You Expecting?, that preceded it. The Fun Rises, The Fun Sets is tight, melodic, scratchy funk, with the occasional voyage into balladry and a splash of rock somewhere in between. The spirits and musicality of Sly Stone and Shuggie Otis lurk in the background, while Van restlessly imbues the whole project with a quagmire of syrupy funk. “Old Hat” is stuttering lo-fi funk replete with soul claps, “Teach Me a New Language” shuffles in the same direction and "(let it) Soak (n)" shares that same smouldering funk DNA and all three, on first listen, seem more devoted to a vibe, than a tune or song. But listen again, and it becomes clear that these songs are integral to maintaining and building the pervading atmosphere of the album, one of sinuous funk accompanied by a lyrical touch that avoids cliche and the ordinary at every turn.

“Pedestal” sees that typically beautiful lyrical phrasing make an appearance ("The problem with love is, I don’t have anything to go with it. / So it just sits in my closet, with all the other empty promises"), accompanied by a tune that is by turns dreamily sweet while driven by rock guitar. Just as the aforementioned musical greats hover in the mix like ghosts in the machine, so the early, playfully sexual Prince finds a cipher in “. . . Puddin” as jaunty guitar and off-kilter keys combine to produce a delightfully cheeky minx of a song. "She Stays With Me" follows where the funk becomes more driven and less languid than the preceding songs.

Center stage, though, is “Headroom.” Hunt has been writing ballads of this quality forever and this stands up there with the best of them. Tortured, painful and filled with remorse, it is powerful far beyond its four-minute duration. "I wish I could edit the things I said to you. / You know I regret it, the s**t I put you through," he sings, and the intimacy of his delivery is, frankly, gut wrenching.

The rest of the album follows the same mood, imprinted with the same DNA. "French For Cloud (cstbu)" is a hypnotic, snail-paced groove and "Rub My Feet (suddenly)" is shot through with lyrical and emotional intensity. Another highlight is the twisting, turning “Emotional Criminal,” complete with cracking line, "Nature the great matchmaker, set the prey up with the predator." What also stands out is the contrast between light and shade. It is, by turns, whispers and screams. The piano ballad “If I Wanna Dance With You” with chiming oriental guitar lines, the chugging “A Woman Never Changes” and the beautifully downbeat title track round things off to complete an album that burrows its way inside your brain and stays there gnawing at your heart.

And when it's done, it hits you. The combination of the gloopy funk, his delightfully expressive whispering tones and the alarmingly raw lyrics adds up to some kind of hypnosis. Van Hunt lures you in with his voice, tramples on your emotions with his lyrics and then leaves you, bereft and spent, before leaving on a funk-fueled Harley Davidson. The Fun Rises, The Fun Sets is hugely cohesive and wholehearted in its pursuit of making a musical statement, and the fact that it succeeds comes down to the supreme songwriting and performance of a man who deserves high praise from all quarters. Hunt's latest collection demands attention and rewards immersion.