Janelle Monáe & Wondaland To Embark On ‘The Eephus Tour’ This August 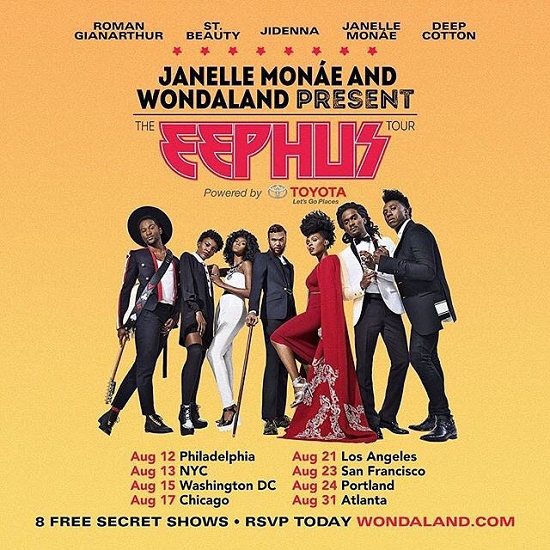 With Jidenna's "Classic Man" (and its Kendrick Lamar-featuring remix) and Janelle Monáe's "Yoga" still burning up the summer airwaves, it's safe to say that Wondaland Records' upcoming compilation album The Eephus is one of the more hotly anticipated projects of the season. With its August 14th release date soon coming, it would only be right for the crew to strike while they're hot and have some kind of tour or something to support it, right? Well, that's exactly what Wondaland is doing!

Janelle, Jidenna and the rest of the Wondaland crew (St. Beauty, Roman GianArthur and Deep Cotton) will embark on an eight-date outing next month to support the project. Starting August 12th, they'll rock the house in Philadelphia, New York City, Washington, DC, Chicago, Los Angeles, San Francisco, Portland and end it all at home in ATL. And to make things even more exciting, the shows will be free, invite-only situations, with only those selected finding out the exact venues in each of the cities. Wanna be in the number? Head over to the Wondaland Records website and enter your name and the show you'd like to attend and maybe you just might get to see what the collective can do in a city near you. Check the flyer above for exact dates and we hope to see you all there.