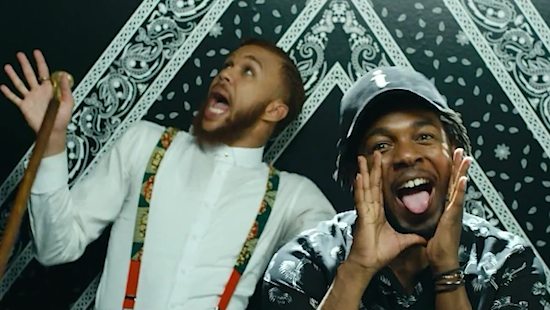 Jidenna's "Classic Man" has low-key become a summer anthem. The breakout single from Wondaland Records' upcoming compilation EP The Eephus, with its electronic synth and bass-heavy beat, can be heard banging everywhere from cars to clubs to block parties to headphones (and, lest we forget, awards shows). And of course, with it being so hot, it was inevitable that there would be a remix – and who better to get to lay a couple bars down than hip hop's classic man of the moment, Kendrick Lamar?

The good kid does just that on the track and in the remix's video, showing some Cali love to the dapper gentleman. The clip kicks off with Jidenna and K Dot spitting in front of a black-and-white background with a familiar paisley bandana print. But the fun doesn't stop there, with Jidenna switching coasts and putting things down while taking in the best that California has to offer. Suited-and-booted, he cruises in a clean drop-top classic convertible and walks down the street in a blinding white suit. He even finds time to turn up at what looks like the livest party in a garage we've ever seen, with friends Janelle Monáe , Ty Dolla $ign and Issa Rae stopping through to turn up and make cameo appearances.

The "Classic Man (Remix)" will also appear on The Eephus alongside its original incarnation. The six-song EP is available for pre-order on iTunes now and will release officially on August 14th. Until then, join in all the Cali love with Jidenna and Kendrick when you press play.