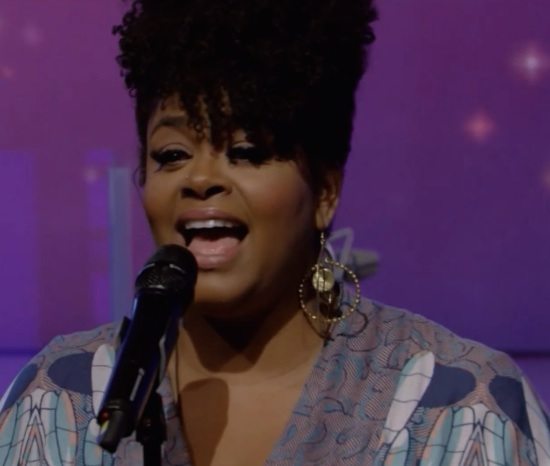 Jill Scott is living her life like its golden this week with the 15th anniversary of her debut album, Who Is Jill Scott? Words and Sounds, Volume 1, that passed on July 18th and her fifth studio album, Woman, getting ready to drop on July 24th. To celebrate the latter, Jill is in full promo mode and we've been seeing her all over our television screens this week.

In the midst of her blazing summer tour, Jilly from Philly took a trip up to NYC to stop by a couple of morning TV talk shows. On Monday, the tantalizing songstress and her band mixed it up on LIVE with Kelly and Michael for a performance of the single "Fools Gold." Dressed head-to-toe in complementary prints and rocking a fierce haircut with her natural curls poppin', Jill looked every bit like the stylish sista-friend in our heads that she is. Then she sang the familiar tale of playing the fool and had the studio and at-home audience caught up in the rapture. The only gripe about this performance was that the scratches, beeps and background vocal effects heard on the studio version didn't translate very well live when done by The Pipes. Other than that, Jill sounded superb, and she had a great rapport during the interview segment with hosts Kelly Ripa and Michael Strahan. (The moment when she dapped Michael up was PRICELESS.)

Tuesday found Scott and the fellas taking over the stage at The View. This time opting for an all-black ensemble and black framed glasses, Jill served up statuesque librarian and read her old man once again with a fresh "Fools Gold" performance. On par with the previous morning's performance, Jill had everyone open from the time she opened her mouth to sing. View hosts Whoppi Goldberg and Rosie Perez were tasked with interviewing Jill after she sang, and Rosie was the weakest link. Bless her heart, but she seemed rushed and unprepared. Scott handled everything like a pro, though, and smiled through whatever flubs there were.

See how Jill put it down on both talk shows right here, and get ready to get down to your local record store (or online retailer) when Woman is released on Friday.