Leon Bridges Is ‘Coming Home’ & Bringing Lots Of Soul With Him 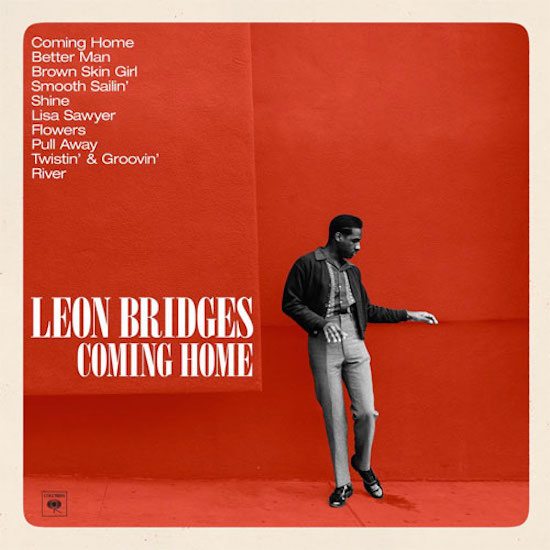 When news broke of a 20-something who sang and performed songs in a way that evoked Sam Cooke, it was understandable that the cynic in all of us might rear its head. But in the face of that cynicism, Leon Bridges steps up to challenge with his debut album Coming Home. While we’ve luxuriated in the glories of '60s and '70s era soul being reupholstered by the likes of the Daptone label and Raphael Saadiq, this is an entirely different prospect. Coming Home sees the soul clock turned back all the way to the early days of what we now know as soul music. Those late-1950s sounds, inflected with rock and roll and doo-wop, are all well and good, but how do they fit into today's musical landscape and does Leon Bridges really walk in the hallowed footsteps of Cooke and those early pioneers of soul music?

On first listen it is exceptionally difficult to avoid the Sam Cooke comparison, at least in terms of the general sound and feel of the album. However, there is another dimension at play that really begins to signal that this could be the real deal. From Little Richard through Al Green and on to D’Angelo, soul music has been powered by the dynamic between the sacred and the profane. Praise for God rivaled by the sins of the flesh. Don’t get it twisted, though, there’s no "23 positions in a one night stand" here. These sinful pleasures are of a much more gentle persuasion, from a time well before parental advisory stickers.

Album title track and opener “Coming Home” is a delicious swaying  piece of mid-tempo soul that slides by on a bed of dreamy backing vocals and Bridges' wonderfully rich tones. “Better Man” finds Leon trying to win back his girl after "hanging with jezebels under perfumed sheets" and sounding as earnest as he is passionate. The unrepentant old soul feel is enhanced by “Brown Skin Girl” a saxophone led ode to a ruby-lipped, brown skinned beauty. A dreamy, soulful sway is married to lyrics about the "cutie pie" in a "polka dot dress." The air hangs heavy with a certain teenage innocence and the evocation of a bygone era in uneniable.

“Smooth Sailin'” is a welcome change of pace, with an uptempo groove and sailing metaphor loaded lyrics. A plaintive guitar deep in the mix, firing off a punchy solo adds an extra dimension to the sounds on offer thus far. Right on cue after a couple of paeans to the female form, comes a blast of the sacred in “Shine.” A soul ballad to the Lord above, it's powered on a wave of sanctified organ that wouldn’t have sounded out of place in Solomon Burke’s hands. Is there any greater compliment?

While odes to mothers can be mawkish in the extreme, Bridges somehow manages to carve a sweet portrait of his "sweet praline" complexioned mum and her "warm like Louisiana sun" heart on "Lisa Sawyer." “Flowers” adds jump-blues and boogie-woogie piano to concoct a joyfully buoyant gem that can hardly fail to raise a toothy grin and a shake of the hips. But it is the final three songs that encapsulate everything that makes this album such a winningly charming prospect.

“Pull Away” pirouettes and twirls its way like a teenager at the prom, and “Twistin' & Groovin'” does exactly what it suggests. It's a slow twist and a sinuous groove yet again perfectly evoking a time of greater innocence to the accompaniment of Bridges’ effortlessly fabulous voice. The crowning glory, though, is the album closer and first single “River.” A simply stunning gospel track, it bristles with vocal electricity. Deceptively simple, it is a punch to the solar plexus that sticks in your heart, mind and gut long after it has ended. It showcases not only his lead vocal but also a beautiful backing vocal. It is a delight, pure and simple.

It’s said that cynics are simply idealists with awkwardly high standards, so when an album like this comes along it puts that theory well and truly to the test. On Coming Home, Leon Bridges has met those standards, leaving cynicism to melt away like a praline heart in the Southern sun. This album transports and transforms the listener with an unwavering commitment to the early soul sound, marvelous songwriting and compelling storytelling that will have music lovers coming back to it for years to come.


TAGS:  al green, d'angelo, Leon Bridges, little richard, raphael saadiq, sam cooke, solomon burke
Previous: Devin Tracy Borrows A Verse From Kendrick Lamar For ‘Make It Up’ Next: Vivian Green Turns Up The Heat With The ‘Get Right Back To My Baby’ Lovers Remix