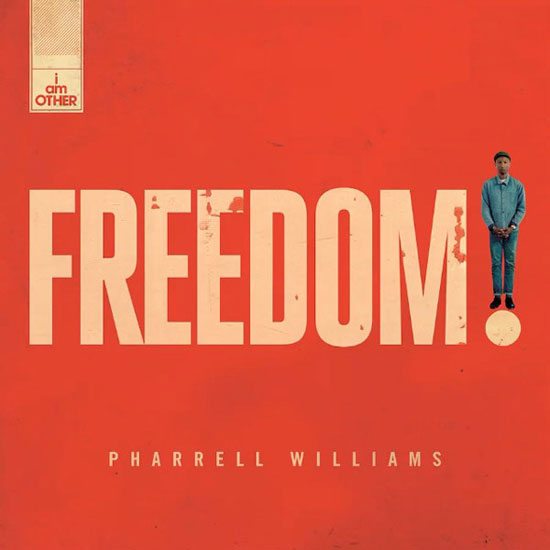 Pharrell Williams just released his latest single "Freedom" ahead of the weekend of Independence festivities in the United States. The GRAMMY Award-winning producer, songwriter and artist is giving us something to jam to while we watch the fireworks and reflect on the first half of 2015. The single also helped launch Apple Music, Apple’s highly-anticipated music streaming service, offering fans exclusive material from their favorite artists. "Freedom" is short and to the point, following Pharrell's formula of a simple, repetitive message that's easy to translate to his fans far and wide. While he screams "Freedom!" in the chorus a few times, there are poignant lyrics throughout the track that make the single worth paying attention to. "Your first name is Free / Your last name is Dom / We choose to believe / In where we're from," he sings. Message! Matching the tone of recent releases like Kendrick Lamar's "Alright" and D'Angelo's "The Charade," should we add this on our revolution-inspired playlist?

While it doesn't possess the same addictive nature as "Happy," the single is a little more serious and still features Pharrell's signature production. "Freedom" can easily be used as your anthem for this new month. If you're good and ready, you can buy your "Freedom" over on iTunes now. Skateboard P also has a video to go along with his declaration, which is a part of the Apple Music subscription package, but you too can purchase it over on iTunes. In case you missed it, he also released a snippet of the video on Twitter yesterday. If you want to hear more from Pharrell and see what else Apple Music has to offer, their monthly subscription price point is $9.99 but the first three months are free for everyone. In the meantime, listen to the track "Freedom" right here and let us know if it gives you free or keeps you in your shackles.