Pharrell Williams Travels The Globe In Search Of ‘Freedom’ 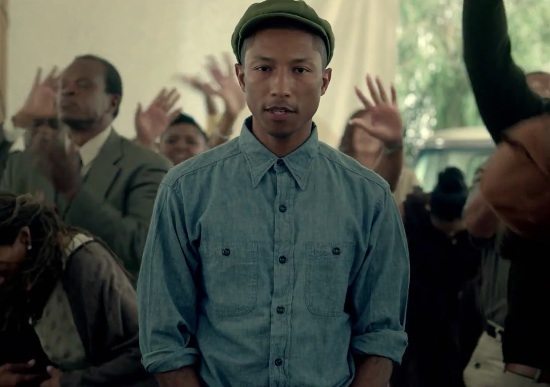 Earlier this month, Pharrell Williams revealed a new declaration of independence with his song "Freedom." Initially introduced with the launch of Apple Music, the music video also dropped when the single did, but it was only available for viewing by subscribers. In case you didn't sign up for the Apple Music free trial or didn't care for the hassle of having to to watch this, the video has finally been liberated for the masses and it premiered on Vevo today.

Befitting an artist in Pharrell's tax bracket, the video is quite a production with director Paul Hunter behind the lens. Taking viewers on an international excursion, it's filled with scenes of the world's major cities, workers, clergy and everyday people. The video features random displays of freedom such as a Lego recreation of the Tiananmen Square military tank versus man standoff, women snatching off their own wigs and worshipers in an African American church praising the Lord.

Meanwhile, our leading man stoically sings into the camera from various locations. Pharrell looks far from happy as he sing-shouts his inspirational anthem about life, liberty and upsetting the set up. His call for freedom comes with some free-spirited dance moves that can be interpreted as a reflection of his frustration. With all that's going on in the world today, you may find yourself needing to dance away your troubles while you watch this.


TAGS:  Paul Hunter, pharrell williams
Previous: Vivian Green Turns Up The Heat With The ‘Get Right Back To My Baby’ Lovers Remix Next: Morning Soul: You Cut Me Open