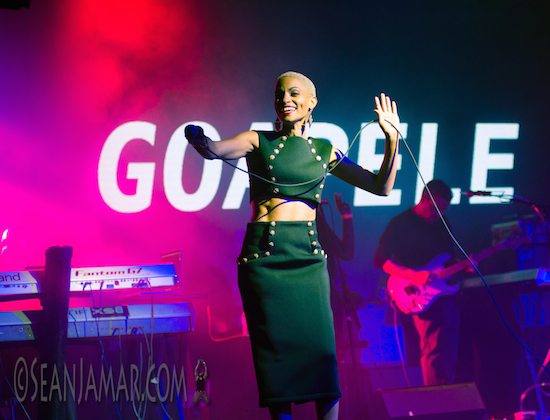 How do you bring in your birthday? Well, if you're Cali songstress Goapele, you hit the stage in New York City for a performance at Highline Ballroom. The bleach-blonde singer did just that, much to the delight of her East Coast fans.

After opening sets from Chris Turner and Mad Satta, Goapele strolled onto the stage in a gold-studded black crop top and matching skirt and proceeded to give the crowd all of her hits and then some. She led with the alluring "Milk and Honey," setting the mood early on before leading into "Tears On My Pillow," "First Love," "Undertow" and a few of her other tracks. But she didn't keep the playlist solely focused on her material. Taking a break from her catalog, she also delved into some of her favorite songs by other artists, including Michael Jackson's "Can't Help It" and Sade's "No Ordinary Love." And since no birthday is complete without cake, her good friend (and the star of Starz's runaway hit Power) Omari Hardwick surprised her on stage with a chocolate cake as the crowd and her band sang "Happy Birthday" to the singer.

After she gained her composure from the sweet surprise, she performed her signature hit "Closer," mashing it up a bit with "Everybody Loves the Sunshine" and, after leaving the stage for a short period, she ended the night on a high note with the energetic "Love Me Right." It's safe to say that though it was her birthday, she ended up giving the audience a gift.