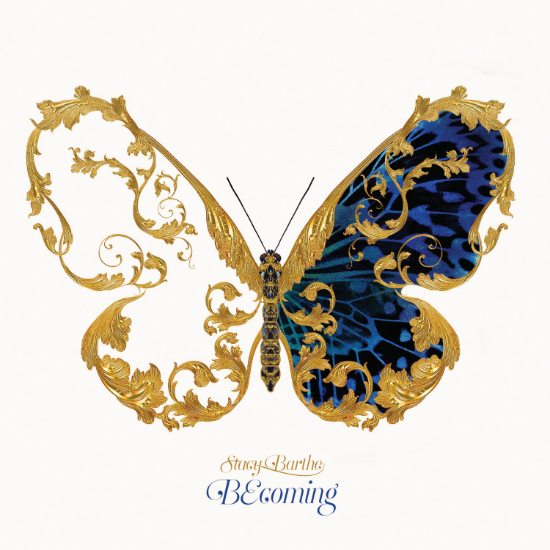 We’ve all heard the story before: A songwriter who is talented beyond measure but lacks the stereotypical “look” of a superstar is forced to live in the shadows while the pretty young things of the moment get to embrace the limelight. The songwriter either becomes the wind beneath the wings of your favorite star or dies under the pressures of the industry. However, unlike those cliche tales of woe, Stacy Barthe’s story lies somewhere in the middle.

Her debut full length album, BEcoming, is not an album of sweet nothings. It is an honest portrayal of Barthe’s rise from crippling depression. It deals with issues of self-reflection, rejection and body image. The calvary doesn’t come in the form of a shining knight or stern human resolve, but humor, experience and self-acceptance. Her tales of woe are told with her trademark lush voice, inventive songwriting and extraordinary production.

The album starts with “My Suicide Note,” which documents Barthe’s suicide attempt  against a string-laden backdrop. However, instead of achieving her goal of sweet death, Barthe wakes up upset that she’s still alive, setting the pace for the album and her eventual redemption. However, before Barthe reaches her happy places, she pulls you down in the trenches of her despair. The first six tracks discuss various levels of sadness, from the '80s vibe of the Mtume-esque self-absorbed “In My Head,” to the upbeat pity party of “Here I Am.” While the songs discuss depressing subject matter, they are unique in their approach, exploring different facets of Barthe’s own trials and tribulations with production that matches each mood.

We’re seven tracks in before we get to the “transition” section of the album, which begins with the interlude “Find It.” On the track, Barthe preaches to the listener, “When that old thing ain’t working / Find a new way.” That is followed by the uptempo “Live For Today” featuring Common, which advises listeners to take baby steps to towards change over African chanting. This section also includes the Being Mary Jane theme song “Flawed Beautiful Creatures,” which is just as inspiring today as it was when we first heard it years ago.

If you were waiting for some baby making music, Barthe doesn’t disappointment. The last quarter of the album contains a number of beautiful ballads. The first full song is the previously released “War IV Love,” which discusses going through hell for something greater. There is also “Angel,” a duet cover of the Anita Baker classic with her mentor John Legend. While many would prefer the subdued production of Barthe’s original cover and the interlude that turned up on John Legend’s last album to the uptempo New Jack Swing take found on this record, Barthe and Legend still turn in a lovely tune.

On BEcoming, Stacy Barthe explores the human condition through her own lens and personal experience. But instead of preaching to us as if her name were Iyanla Vanzant, she’s showing us how she personally kicked, screamed and eventually thrived against an enchanting soundtrack. While the “woe is me vibe” can get a bit old and self-indulgent, it makes sense in the course of the album, with each song unique in its own right. The album is worth every second of the long wait we’ve had for the artist to finally emerge and will keep you company in your times of sorrow, struggle and eventual joy.