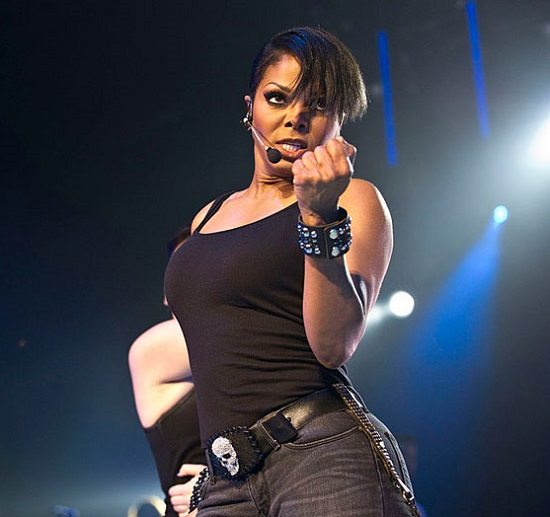 Joy to the world, for Saint Damita Jo, The First and Only, The Wide-Leg Pants Don Diva Empress Czar, hath returned from yonder to bless humanity with her wondrous presence once again.

Janet Jackson's absence, like that of Teen Summit, has wreaked havoc pon the likkle yute dem. We are faced with a generation impressed by weak ass two-steps, lazy hip rolls and pathetic pop star booty pops. There's a whole gaggle of folks out here with whom you and I have to interact daily who are not old enough to remember when Janet had aunties and chirren alike rocking house keys on their ears, dancing up a storm to Jam and Lewis-produced jammy jams about bigotry, education, injustice and illiteracy.

They know nothing of about the shoulder pads and the geometric hair and the legendary performances that don't require circus acts and tigers and trickery and 48 dancers to hide the fact that your favorite doesn't belong on or within 50 feet of a stage.

Yes, these post-Rhythm Nation creatures are inherently disadvantaged, but we can't fault them for their ignorance. Luckily, She Who Made "The Knowledge" is here to steer us all back on course, because, as Roy Jones, Jr., proclaimed in his well-intentioned and ill-advised single, "Y'all musta forgot."

This woman is a master of blending powerful messages and testimony on life's fuckshit into gorgeous and danceable music without being patronizing, exploitatively and obnoxiously contrarian, spectacle-hungry or Madonna-rifically corny. On one album, she sang about infidelity and emotional abuse (“What About”), the need for uncomfortable but transformative introspection (“You”), homophobia and racism ("Free Xone) and the power of Blackness ("Can't Be Stopped"). On another, she and Chuck D told us about poverty and crime just after she sang about abstinence ("Let's Wait Awhile") and weekend ho shit-based adventures ("Escapade"). And elsewhere, betrayal and bondage and emancipation and funky big bands.

So what to expect from Unbreakable?

The first time we got confirmation of a new era from her lips, she assured us, "I've been listening," and everyone ejaculated in unison.

Aside from making us want to dance and hump, will she address her lessors and the talent-free beasts that plague humanity with their audiovisual terrorism? Will Saint Damita Jo finally make sense of Itchy Amelia from Down Under? Has she, too, been melting inside from this barrage of mayonnaise-y musical mediocrity?

A lot of terrible shit has happened since the last time we had something new to buy with Janet's name on it. The woman that's electric sliding her way into a half decade of life has lost a brother, moved on from He Who Made "So Excited" and married another "Rico Suave Man," She launched Rhythm Nation Records and debuted a high-end jewelry line for other ladies with long ass, old ass money. And she is rolling out an album, video and world tour with a mastery and grace that have been sorely missed.

This is a different Janet.

If the newly released snippet and lyrics from "The Great Forever" are any indication of what's to come, she's about to get some shit off her chest. I would love to hear those lush harmonies singing to me about sanctioned police violence or the joys of daily sex. Or maybe she'll touch on transphobia or her lazy ass attempted successors or the Rachel Dolezalian woes of untreated melanin envy. Will she flex a bit or tell us how she fell in love? Will she sing about Michael Jackson or the wonders of Talenti or the regrettable return of jelly sandals? These are the questions.

Thankfully, with longtime collaborators Jimmy Jam and Terry Lewis guiding the ship to musical greatness, anything — and everything — is possible.