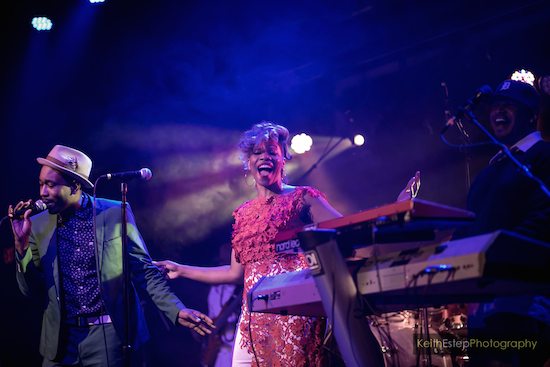 For his first show in Baltimore, Zo! made it a mighty memorable one with the addition of Anthony David and Carmen Rodgers on the bill at Baltimore Soundstage on Saturday, August 22nd. As if witnessing all of these SoulBounce faves on one stage wasn't enough, the evening's special surprise guest was Zo!'s FE Music family, Phonte, fresh from releasing The Foreign Exchange's new album, Tales From the Land of Milk and Honey, the day before.

Backed by Zach Cutler on guitar, Dennis Turner on bass and Jon Laine on drums, Zo! held court on keys while David and Rodgers rotated on and off the stage singing solos and duets from their individual catalogs, covers and selections from Zo!'s albums SunStorm and ManMade. Songs such as Anthony David's "Sweet Pain" and "Can't Look Down" got the live treatment, and he joined Carmen on her current single "Charge," which made for a sensual moment in the show. Carmen brought many of Zo!'s songs to life with her renditions of "Body Rock," "The Train," "Count To Five" and more favorites.

One of the biggest highlights of the night was when Phonte snuck on stage to genuine surprise and raucous applause from the audience. The atmosphere at Baltimore Soundstage was noticeably turned up from that point on as he sang and rapped. He joined Carmen and Anthony for the latter's "4evermore," which had everyone up and out of their seats singing and two-stepping along. The festive mood continued throughout the concert, with no one in attendance really wanting the show to end -- especially those performers on stage who seemed to be having the most fun of all.