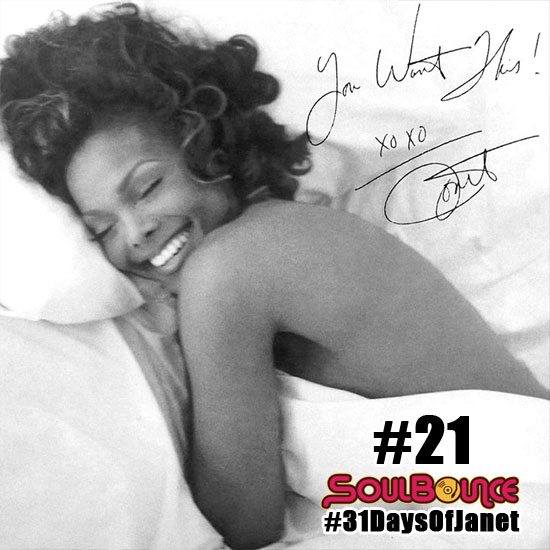 Box braids, paired with baggy pants and sports bras became all the rage when Janet Jackson released "You Want This." What was also the rage was Janet herself, who was having an amazing 1993 with the release of her album janet. The seventh single from her album, Janet and her dream team Jimmy Jam and Terry Lewis wrote and produced yet another successful track to reinforce Janet's iconic sound with samples of The Supremes' "Love Child" and Kool & The Gang's "Jungle Boogie." After the success of her role in Poetic Justice, which introduced us to a different side of Janet, in 1994 she exhibited more of her power and sexuality in the single,  which she selflessly used to teach us the art of the chase.

"You Want This" taught men that they had to work for it while Janet and her girlfriends turned the temperature up a few degrees in the video for the single directed by Keir McFarlane. Janet's roadies, including MC Lyte, embarked on a girl's trip in the desert where they bump into two attractive men they end up catching and releasing. MC Lyte reinforced the message to come correct with a verse letting the fellas know, "'Cause we need a man that's swift, quick and clever."

Probably one of her most memorable dance videos, long-time choreographer Tina Landon made sure Janet and her crew had aggressive, macho, yet sexy moves to enhance her seductive persona and masculine energy. The single peaked at No. 8 on the Billboard Hot 100 and probably motivated a few men to get their act together and a lot of women to expect more. Clearly not one to shy away from talking about love and sex, and sound good doing it, Janet rode off in the sunset with her girls at video's end and into a future with more hits.