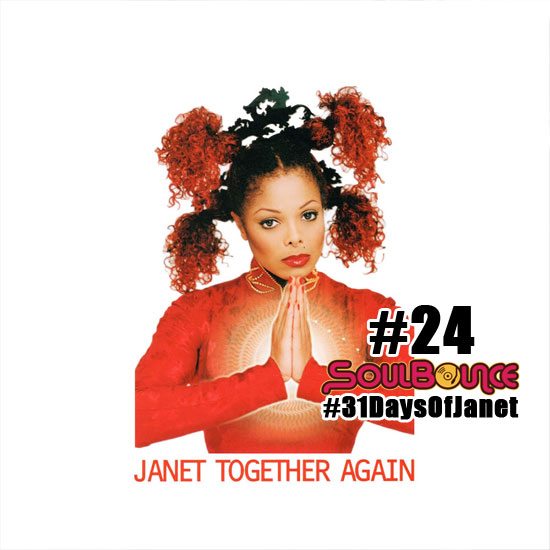 Among the darker, heavier themes on Janet Jackson's 1997 album The Velvet Rope, that album's second single, "Together Again," stands out as the brightest, happiest moment on the project. However, the song also has its roots in somber inspiration. It was written by Janet in tribute to a friend who passed away after a battle with AIDS. In fact, it almost wasn't even realized as the upbeat version we've come to know and love, as it was originally imagined as a tender ballad. Thankfully, Janet, Jimmy Jam and Terry Lewis retooled the song, giving it a four-on-the-floor beat, soulful house rhythm and exuberant feel that celebrated life rather than mourned death.

Everywhere I go, every smile I see / I know you are there smiling back at me / Dancing in moonlight, I know you are free / 'Cause I can see your star / Shining down on me

Most notable about the song, other than it marking another foray into electronic dance music for Janet and slyly nodding at disco classics like Donna Summer's "Last Dance," is that it finds Janet singing out loud and clear. The singer, both loved and criticized for her wispy mezzo soprano, delivered a full-voiced vocal showing naysayers that she could "sing it loud and proud" just as well as she could whisper sweetly into the listener's ear. If you've had the pleasure of buying the actual single, you were also treated to two almost completely different remixes, one imbued with a hip hop edge courtesy of DJ Premier and the other a more sensual slow jam take on the track. However, the original that allows us to smile through our tears as we remember the good times and bad is really the definitive version of the song. The public seemed to agree, as it became Janet's eighth Hot 100 No. 1 and a fitting tribute to those with whom we hope to reunite.