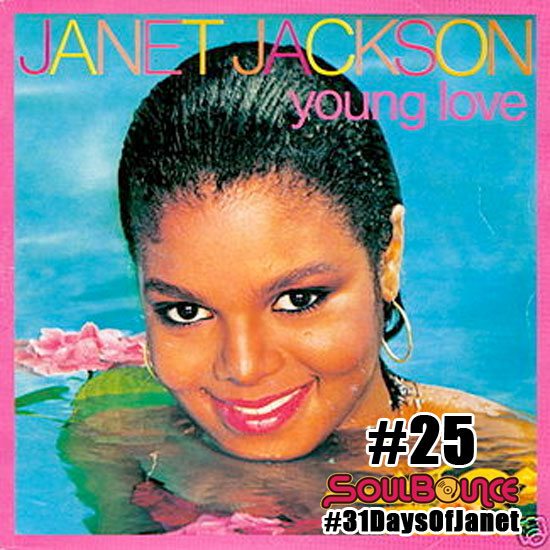 While many, including the singer herself, like to act as if Janet Jackson's musical journey started in 1986 in a Minneapolis recording studio, that isn't actually the case. Her professional recording journey actually began when the then-aspiring young actress, steered by her manager and father Joe Jackson, signed to A&M Records in 1982. Her self-titled debut soon followed, and though the album, along with her sophomore set Dream Street, goes mostly unmentioned, the single "Young Love" is one notable exception. Janet's first, it's a post-disco workout that asserted what we would soon come to know Janet for: a defiant, suffer-no-fools mentality when it concerns matters of the heart.

Backed with a horn and string line that just won't quit, a funky rhythm section and penned by René Moore and Angela Winbush, the song perfectly captures the fine line between the childhood crush her character Penny had on JJ when she starred in '70s sitcom Good Times and the grown woman move Janet would make in real life when she eloped with James DeBarge in 1984. The song is essentially a conversation (or, more accurately, a monologue) she's having with a potential beau, letting him know that though this might be her first time at the rodeo, she's nobody's sucker. And you really couldn't ask for something more solid as a debut, with the single doing respectably on the charts, peaking at No. 64 on the Hot 100 and No. 6 on the R&B charts. It wasn't the breakout smash everyone was hoping for, but it would lay the groundwork for Janet to take control, and shake up the world, in a much bigger way just four years later.