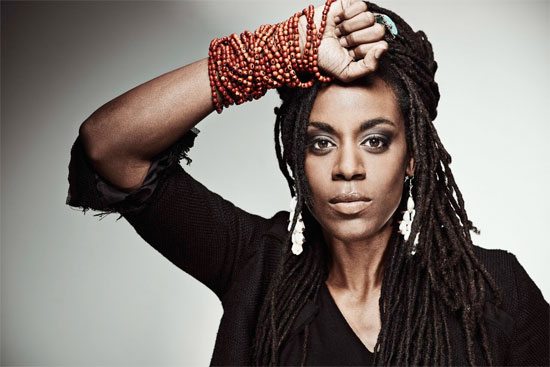 Originally from New Haven, Connecticut, poet-emcee-recording artist Akua Naru has made quite a name for herself on the international music scene and currently resides in Cologne, Germany. Funny enough, my friends assumed I had heard of her because she was American. Once I heard her music and found out how popular she was pretty much everywhere outside of the U.S., I felt kind of cheated that I and probably most of my peeps had never been exposed to her music. So, that's why I wanted to share her sounds with you all. In listening to her music, I was immediately transported to a speakeasy where a funky, eclectic band like The Roots would set the mood for a queen such as Naru to share her story on the mic. Her verses capture a dimension of the human experience I find refreshing. It is revolutionary, inspiring, empowering and even sensual at times. Her latest project, The Miner's Canary, sprinkled with blues, jazz, rock, funk and R&B, has a guest list that reads like a who's who of the progressive soul movement: Georgia Anne Muldrow, Christian Scott, Daru Jones, Cody ChesnuTT, and more.

Have a listen to her latest single, "Seraphin," featuring the vocals of Fetsum while you watch the music video.

There are several things I love about the video, including the beautiful cinematography, the way in which African, African-American and European elements are tastefully integrated and the Dionne Warwick "Walk On By" reference at the end (indeed the way to my heart as she's one of my favorite singers).

So, what do we have to do to get Ms. Naru to come tour in the States? I'd love to see her in concert with Common or The Roots. Now THAT would be a show! Scoop up The Miner's Canary on Bandcamp now and keep up Akua Naru on her official website, Facebook and Twitter.