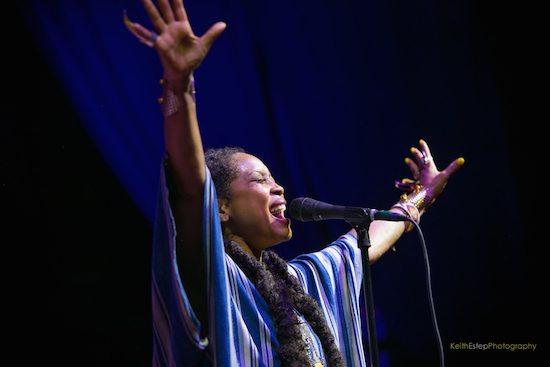 This year's Summer Spirit Festival marked 10 years for the CD Enterprises-produced event. After a decade of entertaining those who appreciate soul music and great weather, we had high hopes for this year's festival, and we were not disappointed at all. Attendees poured into Columbia, Maryland's Merriweather Post Pavilion on August 8th ready for some hot music to match the summer weather. The show's lineup promised Phony Ppl, Avery*Sunshine, Estelle, Junk Yard Band, Tony! Toni! Toné!, Floetry, Anthony Hamilton and Erykah Badu, who all showed up and delivered unique sets that filled up the day.

The Brooklyn-bred band Phony Ppl opened the show on time, with enough energy to last the entire lineup. After their set, our favorite piano-playing songstress Avery*Sunshine graced the stage, starting her short set with an obligatory performance of "I Got Sunshine." While she jokingly expressed her goal was to prove herself to join Anthony Hamilton's background singers, The HamilTones, which she did with every note she sang, Avery clearly stood her own, performing tracks like "Safe In His Arms" and her hit "Call My Name." Although both opening sets were brief in time, they set the pace for an energy and talent-filled show.

Once London-town's Estelle waltzed on stage, the audience were not exactly convinced she could follow Phony Ppl and Avery. Staying true to her style, Estelle shared anecdotes between each track, performing singles "Do My Thing," and "Thank You" to a lukewarm reception. She moved across the stage confidently while the audience sat, performing "American Boy" and concluding her set with "Something Good." We weren't too concerned when D.C.’s Junk Yard Band came on stage to get the energy back to safe levels. The band embarked on a go-go spree, taking the audiences through a set of hits like "Loose Booty" and "Sardines," and had the audience ready to party and on their feet the entire time.

Moving from go-go and back to R&B, Tony! Toni! Toné!, hopped on stage to keep the crowd in party mode. The '90s group performed a longer set, accompanied by vintage Tony! Toni! Toné! videos to remind the audience, who may not have initially recognized the group sans Raphael Saadiq. While they may not have recognized them physically, the audience did remember their classic hits "Little Walter,"  "It Never Rains In Southern California," "Feels Good" and, of course "Anniversary,” which the crowd couldn't help but sing along to.

You already knew Marsha Ambrosius (The Songstress) and her girl Natalie Stewart (The Floacist) were finally back together as Floetry, so the audience was more than ready to watch their reunion magic and chemistry. While Marsha has been performing solo the past few years, she instantly fell back into her role of support vocalist as Natalie dominated the stage with her poetic words and banter. The group performed "If I Was A Bird," "Sunshine," "Butterflies," "Getting Late," and ended their set with "Say Yes." While the performance was a blast from the past, they made sure they spiced things up for the DMV by mixing "Floetic" with Junk Yard's "Sardines." After six acts, the audience started to get a little antsy, as liquor and food lines got longer and longer. 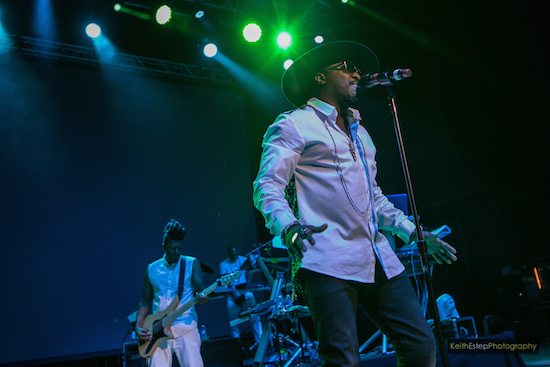 Just in time to will the audience's attention back to the stage, a band and a trio of harmonious soul singers, all decked in white came on stage. The Hamiltones ushered in soulful crooner Anthony Hamilton with their amazing voices, getting the audience ready for a soul-filled performance filled with gospel breaks, goosebumps and funky dance moves.  Anthony naturally started his set with "Cool," which perfectly describes him and his band, and went on to perform tracks like "Woo" and "Comin' From Where I’m From." In between sets, AHam and The Hamiltones took us to church on a Saturday, playing with their harmonies and basically showing out on the microphone. AHam and company also performed "Can’t Let Go," "Charlene," "Pray For Me" and the fan favorite "Point of It All." Anthony left the stage to a rousing reception and honestly left us all wanting more.

While it was rumored that she missed her flight, somehow and some way, songstress Erykah Badu made it on stage just after 10 p.m. and in time (sort of) for her performance. Because it's Erykah, her fans were more than forgiving and held on a little longer to watch Badu sing "20 Feet Tall," "Out My Mind, Just In Time," "Love of My Life," "Me," "I Want You," "Danger" and more. Erykah and her band offered the audience a soulful experience to close out a long show, big enough to fill her signature tall hat.

Overall, the festival was not one to miss. With the varying energy levels, and pretty empty interludes with no comedic host, or any host at all this year, there were a few cricket-filled moments but the performers made it worth our while to consider doing it all over again next year.