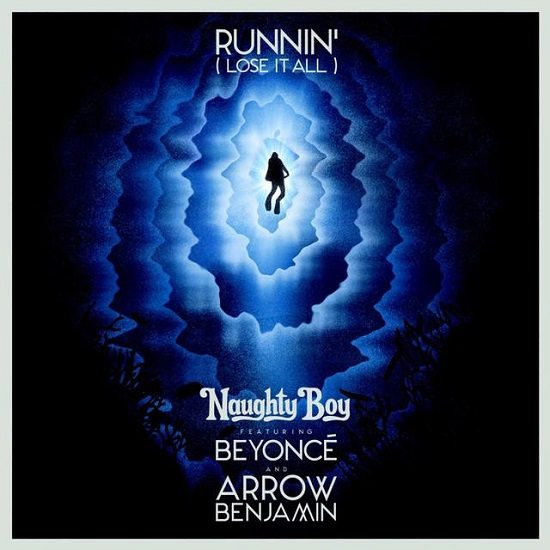 Just when we thought Beyoncé might be taking a well-earned break after releasing her highly successful self-titled album, rumors are once again swirling that the chart superstar is cooking up something in the studio that might see the light of day soon. While we're sure the Beyhive is practically buzzing with excitement, we're reserving ours for something a little more solid. However, for those looking for a new Bey fix, they need look no further than English songwriter and producer Naughty Boy's most recent single.

The Brit teams Bey up with up-and-coming singer Arrow Benjamin (seriously, is there a cooler name than that) for the emotional EDM-tinged ballad "Runnin'." Leading off with a doleful piano, orchestral synths and Bey's powerful opening vocal, the track sets the mood early on. Bey sings about a love that leaves everything feeling empty when her significant other is not around. But rather than sit and wait for her love to return, she's willing to run after the love she wants. Arrow joins in just after the chorus, which brings the song to a faster tempo thanks to kinetic drum work, delivering an equally soulful pop vocal that complements Bey's quite nicely. But it's near the end when the two voices finally unite and the song truly finds its emotional core, as the singers alternate singing the closing refrain, "If I lose myself / I lose it all." It's a touching sentiment that's echoed in the song's video, which finds two lovers desperately searching for each other while underwater.

While it's not what we're used to hearing from Beyoncé, it's definitely a transfixing number worthy of a few spins. Check out the song's video below and be sure to comment and let us know your thoughts on "Runnin'."


TAGS:  Arrow Benjamin, beyoncé, Naughty Boy
Previous: Morning Soul: I’m A True, What? Next: Studio Campfire Stories: ‘Tales From The Land Of Milk And Honey’ Edition – The Making Of ‘Face In The Reflection’