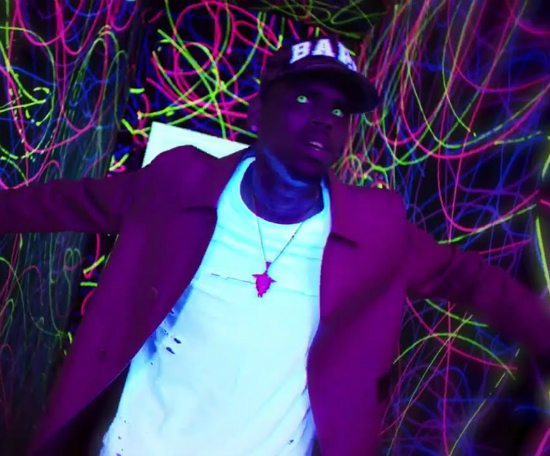 While Chris Brown is known for flexing his dancing skills, Young Breezy is also a force to be reckoned with behind the camera. Brown has directed a number of his own videos, including “Loyal,” “New Flame" and “Love More.” Now he’s taking his auteur skills even further by directing a dual clip for his new singles “Liquor” and “Zero.” The slow burning “Liquor” has been speeding up the charts and tearing up the clubs, while the '80s/Daft Punk-inspired break-up single “Zero” was just released last week.

The nine-minute clip opens at the Golden Gopher, a quaint dive bar where we find Chris Brown trying to drown his relationship sorrows. Just when he says he’s had enough, a lovely young lady on the other side of the bar buys him a very special cocktail. Soon his vision gets hazy and Chris and the leading lady are in a cab making out and stumbling back to her place. She leads him through a fun house maze of psychedelic hijinks and discombobulated dance moves. We’re almost positive the fun house is a metaphor for a drunken sexual romp, but you can never be sure what the kids are into these days.

After finally escaping the harpy’s clutches, Breezy arrives back at his apartment only to find his Spanish mamacita throwing his belongings into the alley and putting Brown on notice that love don’t live here anymore. But Breezy doesn’t trip. He changes clothes in the alley, throws up the deuces and zooms off in his $200,000 Rezvani Beast coup. Sporting a raspberry beret, Brown proves exactly how few f**ks he gives, dancing through a dark alley, dancing through an all night laundromat, dancing through a convenience store grabbing a couple snacks with the crew and dancing in front of the Palace Theater. Though people always have a lot to say about Chris Brown, you can never say that boy ain’t light on his feet.

We have to give Chris Brown his props for the dual video effort. While the actual storyline goes by the wayside after the first segment in favor of some dynamic dance moves (and really, it was a small loss), the visuals are entertaining, exciting and show off what Mr. Brown does best: dance! Both “Liquor” and “Zero” will be featured on Brown’s upcoming album, Royalty, named after his daughter.