Gary Clark Jr. Gets Spiritual With Back To Back Videos For ‘Church’ & ‘The Healing’ 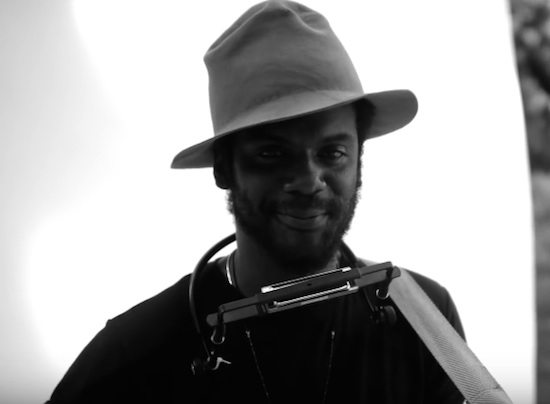 On the heels of the release of his sophomore album, The Story of Sonny Boy Slim, Gary Clark Jr. gives us enthralling back -to-back visual treatments for his spiritually rooted releases "Church" and "The Healing."

The video for "Church," directed by iconic photographer and director Danny Clinch, allows Clark, flanked by his sisters Shawn and Savannah as supporting vocalists, to take center stage. Finch's decision to have the trio standing against a white backdrop in a natural outdoor setting is minimalism at its best, bringing all eyes to the stirring acoustic performance.

"Church" is not an arbitrary title for the song as Clark and his sisters clearly draw from direct experience singing the spirituals of the black gospel tradition. But while gospel is at the root of the song with Clark's refrain, "Lord, My Lord I need your helping hand," it's skillfully interwoven with the blues,and Americana. It's this seemingly effortless ability to fuse genres with only a guitar and harmonica that helps make Gary Clark Jr. such a phenomenal musician and is another reason that he is  so spellbinding to watch.

Lyrically, "Church" is an outcry for God's intervention in times of despair, that Clark Jr. pulls off in a highly moving, resonant way, strengthened by the amazing chemistry he has with his sisters.

Within 24 hours after the release of  "Church" we were presently surprised with a follow up video for his single, "The Healing." Rather than a lamentation to God, the subject that Clark sings of in "The Healing" is music. This more story-driven video follows a mysterious woman on a mission that takes her down river and into the backwoods. Our central character is searching for an answer to problems we later find out she attempted to treat with psychology and prescription drugs. When those failed, she decides to go on a spiritual journey that leads her to a tarot card reader and finally to Clark. "The Healing" finds Clark playing the part of some type of mystic, who, along with his sisters, seems to cast a spell to help our protagonist with the problem she sought him for.

Both engrossing to watch, each music video has a unique appeal. "Church" is driven by emotional vocal and musical performances fusing gospel and rock, written like a Psalm to God. On the other hand, "The Healing" is a video driven by the mystery of the story with a pop-blues sound, evoking the mystic voodoo themes often found in classic blues music.  With both "The Healing" and "Church" among the leading singles for The Story of Sonny Boy Slim, it's clear that spirituality is a major theme on his latest LP.

If you want a chance to experience Gary Clark Jr.'s "Church" and "The Healing" yourself, check out the videos below, buy The Story of Sonny Boy Slim on Amazon, iTunes or GooglePlay and see him live coming to a city near you.