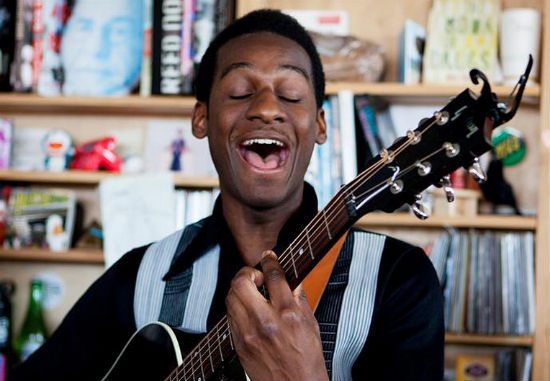 A diverse audience of music listeners and NPR staff shuffled into a cubicle-ridden space in the NPR headquarters in Washington, D.C. as an unassuming artist rehearsed with his band like there was no on in the room. The artist, decked out in a vintage dress shirt with his guitar in tow, was Leon Bridges who stopped by NPR Music's Tiny Desk to perform a few tracks from his debut album Coming Home. In the packed office space, Leon and his Fort Worth-bred band performed stripped-down versions of songs "Coming Home," "Smooth Sailin,'" "Twistin' & Groovin'" and "River." Reppin' Texas throughout the performance, Leon, with a little vocal help from background singer Brittini Jessie, transported us to the '60s with his honest and humble performance of each track.

Leon made sure to check in with the audience to make sure they were still engaged, surprised that they even showed up. Often compared to Sam Cooke, Leon hypnotized the NPR audience with his anachronistic performance that's more than welcome in 2015. With his southern twang, he told anecdotes before each song and also introduced his band mates with sincere appreciation. After the performance, Leon stayed to chat with fans and the NPR staff, while still unaware that something special transpired behind the famous Tiny Desk.

While he channels the raw goodness that we've missed, we're just glad he's here to breathe his vintage magic into the music industry one song at a time. His brand of mid-tempo soul, mixed with country and blues was perfect for Tiny Desk and even more perfect for our playlists. You can get Leon's album Coming Home on Amazon, iTunes and Google Play. If you want to get a taste of his live performances, watch Leon and his band perform at NPR Music's Tiny Desk right here.


TAGS:  Brittini Jessie, Leon Bridges, sam cooke
Previous: Farrah Franklin Comes Back On The Scene With ‘Magic N Makeup’ Next: ‘Lean In’ For A Closer Look At Lizz Wright 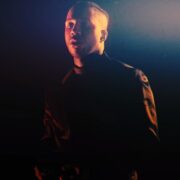