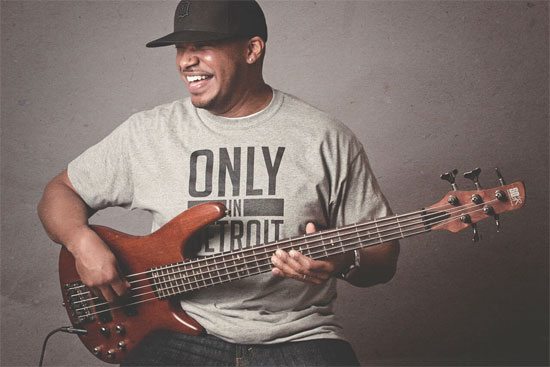 The original instrumental version that I created was titled "Bookit." (I always name my instrumentals based on whatever the hell is happening in my life. At the time, I was booking a good number of plane tickets for shows. Obvious title, but it's much better than numbering my music as "Instrumental #1", etc.) Once I had a basic chord progression, then came the drums, which wound up becoming a mix of programmed drums and parts that I had played live all the way through, including the snare and a cabasa. Initially, I recorded a demo version with full out and finished drums plus me playing the entire chord progression and changes out on the piano (this is similar to what I've done in the past for songs like "Africa"). Since I was on the road a great deal last summer with The Foreign Exchange, the "Bookit" instrumental sat for a couple of months. I can remember coming back home from +FE's European Tour in October 2014 and going back through some of the music to see how everything sounded and I came back across "Bookit." At first, I was mad at myself for not writing all those damn chords and changes out as soon as I recorded them (I am terrible with that, I always have to re-learn my own music when it's time to play it live), but I quickly got over it because I loved the piece so much. I ended up taking some time to write all of the chords out and practice the song on the keys, then the bass guitar. Since the demoed piano was already recorded, I laid down my bass guitar parts first. Once that was done, I then muted the demo piano and recorded some Rhodes, then layered it with another pass of just piano. At that point even with all of the chord changes, it was a pretty simple sounding recording, but the idea was now firmly in place. Thinking back, I honestly cannot remember where we were when I let Phonte hear this joint for the first time, but I do remember him hitting me up on more than a couple of occasions with, "Man, let me know when you finish up that 'Bookit' joint." I would have wanted to send him more of a complete song, but instead on February 4, 2015 I sent him a super rough draft in an email that said: "Bass, drums, keys... Rough joint."

Fast forward to April 3rd, The DAY I got back home from the second studio marathon in Wilmington, NC with Nic, I got an email from Phonte that said, "BANG."

My response after hearing it: "MAAAAAAAAAAAAAN. Send me a two track of these vocals... ASAP!"