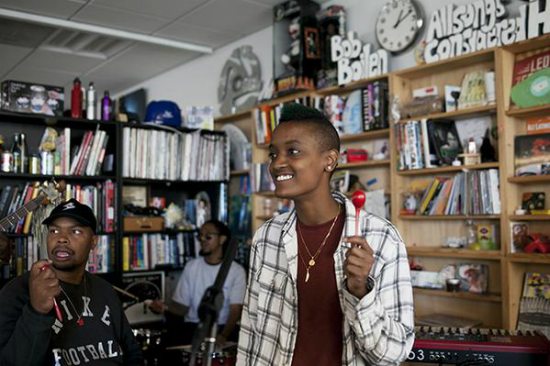 L.A.-bred band The Internet brought their West Coast vibes to the East Coast on their recent Washington, DC tour stop. What better place to sing a few ditties for an intimate audience than NPR Music's Tiny Desk? All five band members squeezed themselves behind the eclectic office set up, marveling at the unique toys and records on the wall while they rehearsed. Even though they got a bit of a late start, the group, with nervous smiles, apologized to the small audience made of NPR staff and music lovers alike. Nobody minded, of course, as the band warmed up and the audience enjoyed the instrumentals.

Once The Internet was ready to go, Syd Tha Kyd held down the vocals for a deconstructed performance of their most popular tracks. The band started with "Get Away" and "Under Control" from their recent album Ego Death, where Syd wove in and out of mid- and high octaves. Her melodic, pillow soft vocals were a little hard to hear in person but are crisp and clear on video. The stripped-down performance was different for the group, whose album features booming instrumentals and amplified vocals, but it was a chance to see what they were really made of. The talented group concluded the short and sweet performance with "Dontcha," a fan favorite from their sophomore project, Feel Good. The audience was excited since it was the first time the band had performed an acoustic version of the song, but we couldn't tell.

With a cohesive set, The Internet delivered a laid back and unique Tiny Desk performance and concluded their visit with jokes and stuck around to talk to their new fans. After Tiny Desk, the group went on to perform a sold out show at the Howard Theatre before they continued their North American and UK tour. If you can't see the group live in a city near you, you can still get The Internet's recent album, Ego Death, over on iTunes. In the mean time, 'dontcha' wanna see The Internet's NPR performance? Check out their Tiny Desk stint right here.


TAGS:  The Internet
Previous: V. Bozeman Contemplates Love In ‘Empire’ Track ‘Hourglass’ Next: Tinashe’s Cover Of Bleachers Is ‘Better’ Than We Expected